View From A Platform... 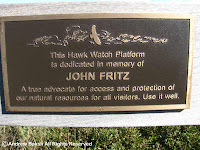 Last Sunday, I decided to do a stint at the Hawk Watch at Robert Moses State Park LI.  It helped that my friends Shai Mitra and Patricia Lindsay were doing their civic duties in manning the fort.  I birded for a bit before getting there and missed seeing the early morning flights, which included a Western Kingbird.  When I got to the Hawk Watch, I was very pleased to see that friends Tom Burke and Gail Benson were also in attendance.  It turned out to be a slow day, but I got to watch Tom, Gail, Pat and Shai really showcase their skills in calling out incoming objects.  I use the term objects because that is what you see way out in the distance.  Like a blip on a radar, birds are seen way off in the distance until they get close to be identified.  Depending on their skill level, some birders are able to make the correct call from a distance and even just by their calls.  For example, hawk watch participants are faced with images like the following. 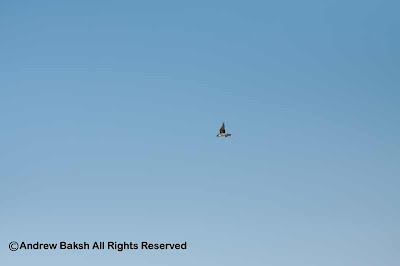 If you were not able to identify the incoming bird, then maybe the next image will help you develop an ID. 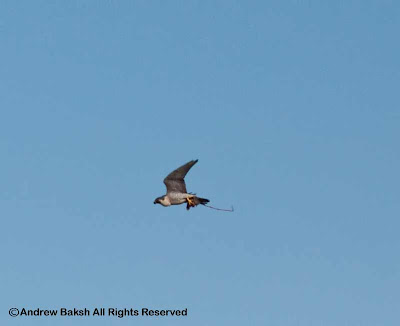 By now, you should be able to discern the ID of this bird based on some of the identifiable field marks. It is a...Peregrine Falcon.  But, then you knew didn't you :) 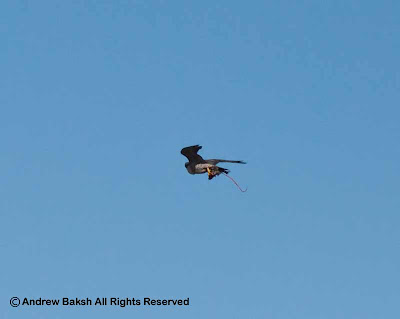 Notice it is carrying what we presumed to be the entrails of lunch - perhaps a Pigeon?

The work at the Hawk Watch requires a good eye and for participants to be alert at all times.  However, there are times when folks just tend to well...slack off.  Like this guy below.  Looks like he is thinking about Football instead of being, "focused' :)
Tags: