After the last two miserable Pelagic outings in terms of the LACK of birds, I was excited and hopeful as did many other birders with last Sunday's Pelagic scheduled to depart from Freeport Long Island.  The trip organized by Sealife Paulagics is one of many that is run by Paul and his wife Anita Guris, check out their website for upcoming trips.

In my over exuberance, I set my alarm for Sunday instead of Saturday. Good thing for me, I was not sleeping well on Friday night into Saturday and so I hopped out of bed later than I would have liked but felt I had just about enough time to make it to the boat.  After a hair raising ride on the Southern State Parkway, I made it...just barely and scampered on board.  I was happy that I made it but that happiness turned to dismay as I realized just as the boat pulled out from the docks that in my haste, I had forgotten my winter coat in the car.  This was not going to be fun but what else was I to do but suck it up and of course good birds would make me forget how cold it was.

And we did get GREAT birds that made me forgot about the cold, like this awesome NORTHERN FULMAR that came in close enough for crippling views.  Is this close enough?

No? Well how about this one.


This was a life bird for me and this is the kind of looks that everyone should have of their life Fulmar.  It was SWEET!  What cold?

The FULMAR was awesome but you know us birders, we want more and we got more!  How about point blank looks at adult and juvenile BLACK-LEGGED KITTIWAKES followed by GREAT SHEARWATERS.

The Trips highlights were summed up by trip leader Doug Gochfeld as: Northern Fulmar, Sooty Shearwater (late, unexpected bird spotted by a few of us as we huddled in the back on the lower deck and later found out it was also seen from the upper deck) , Cory's Shearwater (disappointed we did not get closer looks), Great Shearwater, Black-legged Kittiwake (had a good many out there with EXCELLENT looks at adult and juveniles), "Kumlien's" Iceland Gull- 3 (2nd cycle, juvenile, adult), Lesser Black-backed Gull (juveniles), Bonaparte's Gull, Laughing Gull and Northern Gannet.  We also had Great Blue Heron, American Goldfinch, and Red-winged Blackbird.  We also had some Swallows at the beginning of the trip.


Overall a very successful trip despite being cold. Oh and I almost forgot to mention that the ride back was one of the roughest I have encountered at seas with 8ft swells.  There were a lot of "green" faces and "human" chumming taking place; thank goodness I was spared.  Being cold and getting sick would have been double the trouble.  Many thanks to all the leaders on the trip for their hard work in spotting the birds and ensuring all aboard had good looks.  Shout out to leader, Sean Sime, who was IMHO, outstanding in not only spotting birds but helping the many photographers keep track of the specialty birds through traffic.  Sean manned his area LIKE A BOSS!

Posted by BIRDINGDUDE at 9:23 PM 0 comments

NY Times Article on The Decline of Insect Populations...

Scientists are raising an alarm about the decline of the Monarch Butterflies during migration. It is believed the decline, is tied to the loss of habitat and insects which are being devastated by the loss of native vegetation and the use of chemicals.

"The loss of bugs is no small matter. Insects help stitch together the web of life with essential services, breaking plants down into organic matter, for example, and dispersing seeds. They are a prime source of food for birds. Critically, some 80 percent of our food crops are pollinated by insects, primarily the 4,000 or so species of the flying dust mops called bees. “All of them are in trouble,” said Marla Spivak, a professor of apiculture at the University of Minnesota. Farm fields are not the only problem. Around the world people have replaced diverse natural habitat with the biological deserts that are roads, parking lots and bluegrass lawns. Meanwhile, the plants people choose for their yards are appealing for showy colors or shapes, not for their ecological role."

Given the continued loss of habitat in parks across the US, this is worth a read.  The full article can be accessed here.

Posted by BIRDINGDUDE at 11:28 AM 0 comments

The two banded Red Knots reported on November 7th to the United States Geological Survey (USGS) website were both banded in Goshen Cape May, New Jersey. The certificates below show who banded them and what year. 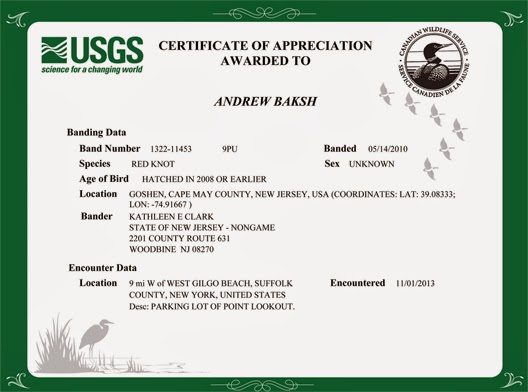 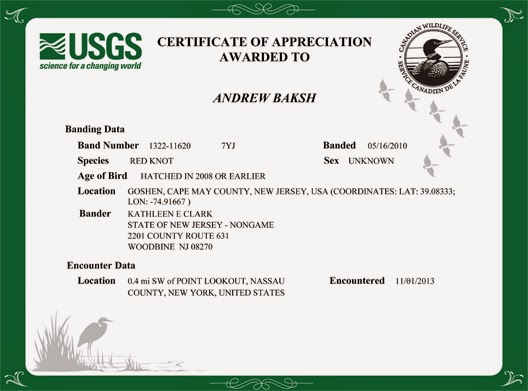 Posted by BIRDINGDUDE at 4:32 PM 0 comments

For most birders, the shorebird season is over and done with. I on the other hand and I am sure there are others out there, continue to check for shorebirds at Jamaica Bay.  Besides my SHOREBIRD OBSESSION, I have a couple of others reasons.  Earlier in the year I engaged with many birders (not just from New York) online and offline the noticeable change in the pattern of migrating birds.  It seems this year the change in migration pattern for many birds was more noticeable??  This sort of discussion coupled with the behavior of the shorebirds this summer on the East Pond made for interesting discussion and speculation.

For one, long time shorebird observers on the East Pond at Jamaica Bay were concerned at how birds were going to react to the pond life in the aftermath of Hurricane Sandy.  By shorebirding late, I am hoping to add to the data gathered over the summer on how the birds reacted to the changes on the pond, how late shorebirds are moving through the area, their behavior in terms of feeding habits as well as study their plumage at this time of the year.  Here is an example of a Pectoral Sandpiper (below) last observed on November 16th showing that some shorebirds are still making their way through.

It so happened that this morning I read an article discussing a fascinating study on shorebird migration to time keeping and how it relates to new "recruits" (juveniles).  It also mentions other studies where some birds may be having a tough time adapting their migration cycles to changing climate.  See a summary of the article here.

We are still in November but my most interesting shorebirds this late on the East Pond have been a couple of Western Sandpipers, a few Semipalmated Sandpipers, a very interesting looking Least Sandpiper(plumage wise) and several Pectoral Sandpipers.
Tags:

Posted by BIRDINGDUDE at 11:39 AM 0 comments

Posted by BIRDINGDUDE at 3:55 PM 0 comments

Some of these birds are notables due to the dates. Take for example, Snowy Egret, which is not a rarity at Jamaica Bay is now going to be flagged as "rare" because it is getting late for it to still be here when it should have moved on to its wintering grounds. There were 2 still hanging around on the East Pond as of November 5th.

On that same day, I had a nice count of 3 Pectoral Sandpipers, a bird that was rather scarce all summer on the East Pond.  I had to use my Point and Shoot to try for a shot with all 3 in the same frame.

On November 8th, I found a drake Eurasian Wigeon, which I have not seen since so I am not sure if it moved on or is out in the bay when I am looking for it on the pond.  If this bird is no longer around the immediate area, I suspect it will turn up somewhere in Brooklyn.  Perhaps at Floyd Bennett Field near Archery Road where Eurasian Wigeon has been reported in the past.
Tags:

Posted by BIRDINGDUDE at 2:36 PM 0 comments

Here is the follow up to my "Peregrines are Punks" post.  (Sigh...yeah and I know the meaning of "punk").  As readers may know, I was quite the frustrated birder having crossed the East Pond at Jamaica Bay Wildlife Refuge from the South End to the North End only to see 1 then 2 Peregrine Falcons spook a bunch of shorebirds, that I wanted to get a closer look at having scoped them from across the pond.


It was a frigid day and I was under dressed but I was not going to leave without having a chance at studying the flock, so I stubbornly waited it out.  My gamble and a prayer paid off as the birds filtered back onto the pond  and I was able to study them for some time.


It turned out that the mixed flock had some goodies.  Can you tell from the photo what the flock is made up of?  In the end I pulled out 1 WESTERN SANDPIPER, 3 SEMIPALMATED SANDPIPERS and a single WHITE-RUMPED SANDPIPER, that were hidden in the flock of DUNLINS.

Birding on the East Pond can be quite rewarding with patience and the time I spent with the flock got even more rewarding as 2 Pectoral Sandpipers dropped in from out of nowhere. I had not seen any on the pond as I made my way up north, so they could have just flown in or were tucked in some corner out of sight. It was nice to add to the diversity; especially since Pecs were scarce all summer. I finally left the East Pond, shivering from the cold but quite happy at being able to study the shorebirds. In a show of appreciation, I said a silent thank you to the shorebirds for being cooperative and to the Peregrines for not disturbing me :)

Posted by BIRDINGDUDE at 8:17 AM 0 comments

Regular readers know by now how much I enjoy documenting banded birds and sharing them on my blog. On November 1st, while out scouting on Long Island for the New York State Ornithological Association conference to see if I could turn up some thing good for the weekend field trips. I came upon a flock of shorebirds in the Point Lookout Town parking lot while looking for Gulls. 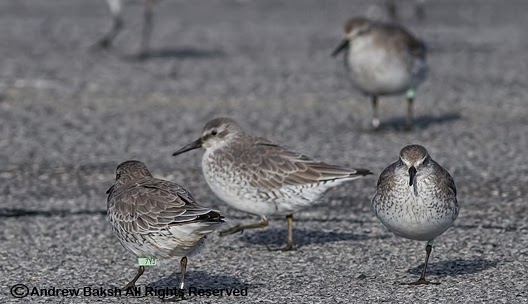 The shorebirds included Rudy Turnstones, Dunlins, Black-belied Plovers and RED KNOTS of which 4 were banded. I managed to document 2 of the 4 before a roving Peregrine Falcon put the shorebirds up and they never returned. Another example of Peregrine "Punk" behavior! I have reported both bands and await the results which I will share with you, so keep checking back for an update. 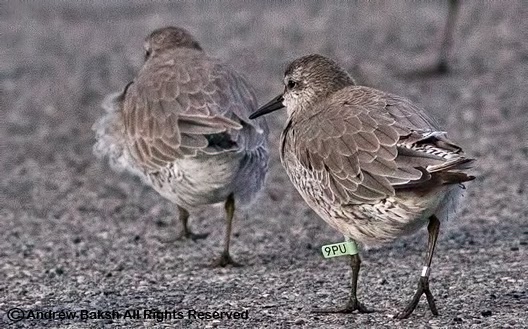 Posted by BIRDINGDUDE at 4:17 PM 2 comments 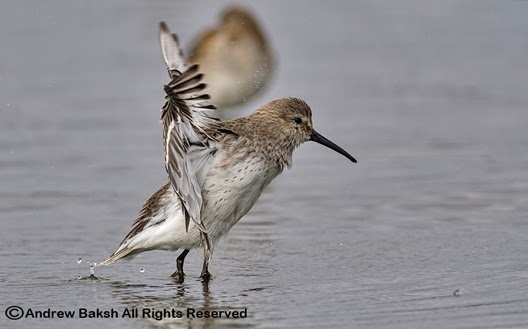 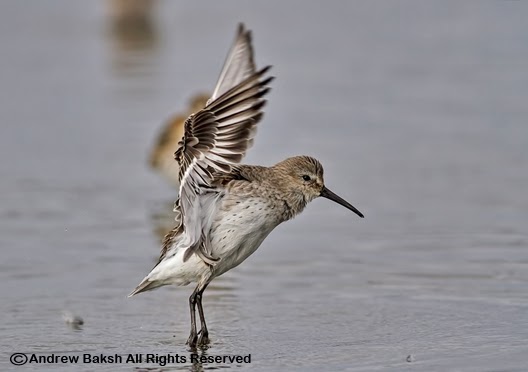 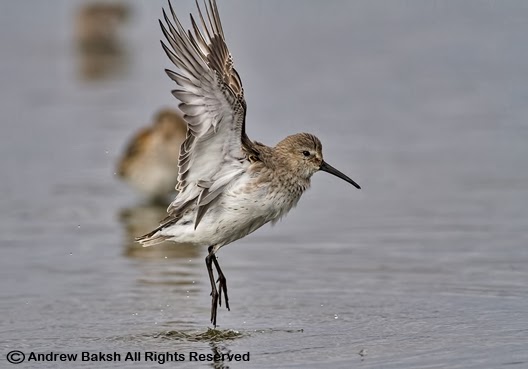 Posted by BIRDINGDUDE at 8:42 AM 1 comments