The Northern Nassau Christmas Bird Count was held on the Winter Solstice, Saturday, December 21st. Although it was the shortest day of the year, we recorded 118 species coming within 1 of the all time record which is 119 species set in 1973. Our compiler reported that new species for the count were Black Guillemot, Lesser Yellowlegs, and Seaside Sparrow.  Other rarities included Greater White-fronted Goose, Barrow’s Goldeneye, Cackling Goose, Eurasian Wigeon, Lesser Black-backed Gull, Bald Eagle, Red-headed Woodpecker, and Vesper Sparrow. 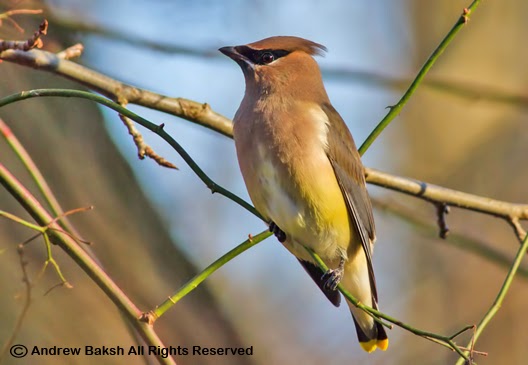 My group consisted of Ken Harris, Scott Emmons, Doug Futuyma, Eric Miller and of course yours truly. Sometimes we birded as a group and other times we broke into two teams with Ken, Eric an I on one team and Doug and Scott on another. We covered a number of places and were responsible for a few of the rarities such as Greater White-fronted Goose, Cackling Goose and Vesper Sparrow. This was my first time participating in this count since the schedule worked out well for me and I am hoping to do it again next year. Ed, Eric and I made a solid team and you can bet we would like to take a crack at this 119 record.  Here are a few photos of a couple of the rarities our group found on the count.

Posted by BIRDINGDUDE at 9:08 AM 1 comments

Kissena Park Corridor has produced some exotic beauties this year like Long Tailed Whydah, Budgerigar, Common Linnet and European Goldfinch.  Presumably, all are escaped birds who find Kissena Corridor a welcoming abode for shelter and food. 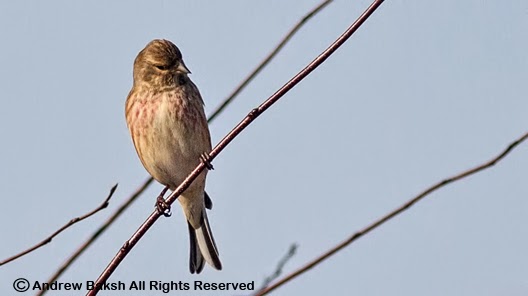 I had seen 2 out of the 4 until yesterday when I finally caught up with the Common Linnet. This finch like bird, breeds in Europe, western Asia and north Africa.  The provenance of this bird, is sure to lean more towards the escapee side but nevertheless it is a neat little bird.  So far, it has shown its hardiness to survive the cold spells we have had; it will be interesting to see how long it continues to be seen. 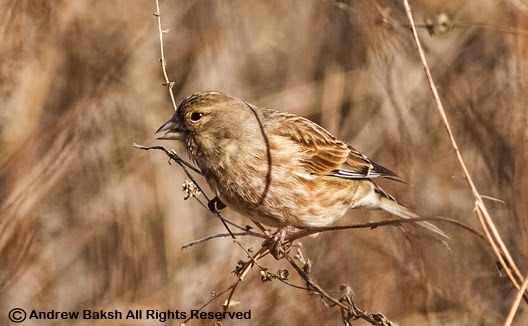 Posted by BIRDINGDUDE at 1:36 PM 0 comments

I got off to a later start than I would have liked but I made out to Stuyvesant Town in Manhattan today where I caught up with a splendid looking Varied Thrush that was found on Sunday by Louise Fraza and Pearl Broder. I have not rode the L Train in years and that is what I took to the 1st Avenue stop, which put me on 14th Street. A few blocks north to 18th Street and then I was making my way towards the area known as the Oval. 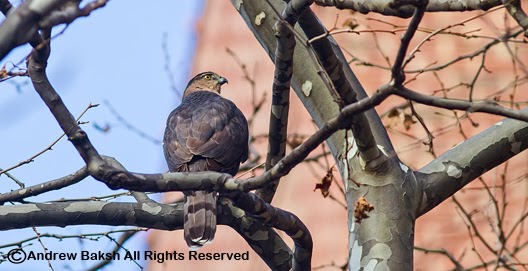 I did not have long to look as I spotted Peter Post with his photography gear and after a few minutes of waiting, I got looks at one fine looking Varied Thrush. The bird was active but shy only coming out in the open a few times. During my observation, I was trying to figure out what it might be eating and several times I saw it with a peanut in its bill and even managed a photo showing that.  Several other birders joined the few of us that were there including a few that I knew like Tom Fiore.  Some folks unfortunately missed the bird because it became less active after a Sharp-shinned Hawk showed up.  Once the Sharpie made its presence know, the VATH disappeared into the shrubs and was not seen for over 45 minutes and still was not when I left around 2:45 pm. This was not a year bird for me, having seen the Prospect Park bird earlier in the year but who could resist seeing such a beauty. If you have not made it out as yet to see this bird, maybe a few of my photos below will convince you to make the trip. 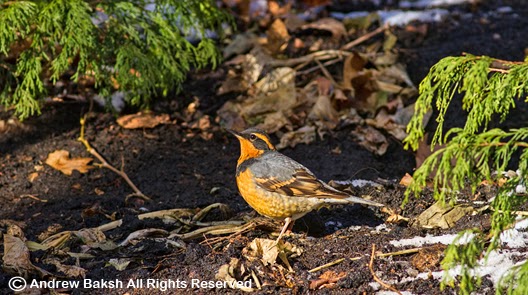 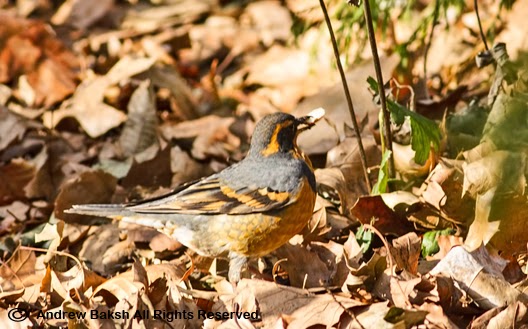 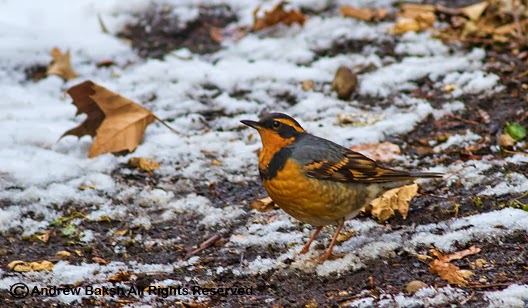 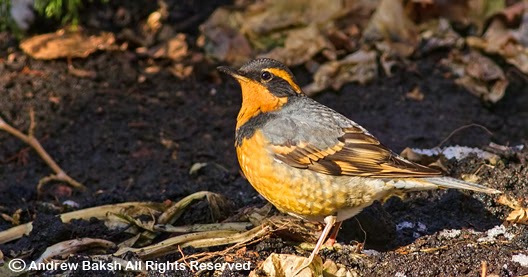 Posted by BIRDINGDUDE at 6:12 PM 4 comments 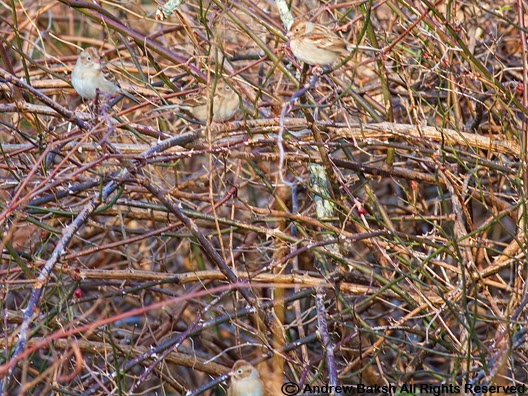 Forty participants conducted the Captree Long Island Christmas Bird Count on Sunday December 15th, 2013. This Count circle, is on the south shore of Long Island, around the Fire Island Inlet. Shai Mitra, our compiler reported that one of the first birds of the day was a Snowy Owl that flew directly over members of the barrier beach parties as they assembled at Captree around 6:45--the first of an astounding tally of 14 Snowy Owls on the count.

This was the 2nd count of the weekend for me, having participated in the Montauk LI count on Saturday (A report on that count is pending).  Joan Quinlan and I who birded several spots in the Seatuck area had to expand our list of sites and so it was a whirlwind but fun day for us. The preliminary number including count week birds, brings the Captree CBC 2013 total species to 119.  The following are some of the highlights, notables and misses from the count.

Posted by BIRDINGDUDE at 12:43 PM 0 comments

YAY for patch birding and Girl Power!!!  Perhaps, my best moment yesterday during the Captree Long Island Christmas Bird Count was when I learned that Louise Fraza and Pearl Broder had found a Varied Thrush in Stuyvesant Town, Manhattan NYC. The bird was later refound by Ann Lazarus.  I was especially pleased that Ann was involved because of all the efforts she has put into birding that patch.

The story goes that Louise Fraza and Pearl Broder who were birding with Ann Lazarus in Stuyvesant Town, had broken off from the group and were counting the Robins on a grassy area near the North-western edge of 20th Street and Stuyvesant, near first avenue. When Louise was stunned to see a bird that was not an American Robin but instead a Varied Thrush. Turing to Pearl, Louise remarked, "look a Western Robin."  You could imagine the excitement that followed.

Pearl who had her camera immediately began to take photos. They then went looking for Ann Lazarus who instead of going for the bird, went to her apartment to try and post the bird but ran into computer difficulties (I wonder how many birders would be that generous to post instead of going after the bird immediately).  She then called and left me a message on my cellphone.  In the meantime, Louise was trying to reach as many people as she could; especially those who were at the Christmas count in the Central Park Armory. She finally managed to reach Cathy Drake who in turn contacted Alan Drogin (sp) who then announced the find at the Central Park CBC compilation.

Ann then returned to the area and refound the bird in a different location.  Really a nice story and terrific job by Louise, Pearl and Ann for the find and getting photos of the bird.

Today, Stephen Chang provided a link from the Linnean Society that shows a map of the area and a write up by Ann Lazarus on how to bird the Stuyvesant Area.  I hope this helps for those of us who are not familiar with the location.  Congratulations again to Louise, Pearl and Ann on a terrific find.

Here are some photos from Pearl Broder who documented the find!

Yesterday, I received certificates for reporting 2 banded Snow Geese that were observed on November 28th 2013 at Jamaica Bay Wildlife Refuge in Queens NY.  Both birds were banded at the SOUTH PLAIN OF BYLOT ISLAND, NUNAVUT, CANADA by Doctor R Gilles Gauthier.   The certificates below show who banded them, where and what year. 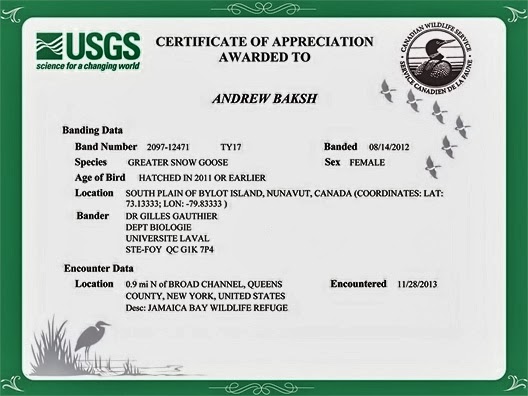 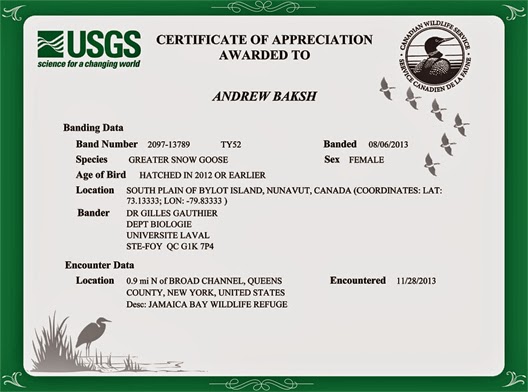 Posted by BIRDINGDUDE at 10:53 AM 0 comments

Port Authority Backs off From Killing Snowy Owls at JFK... 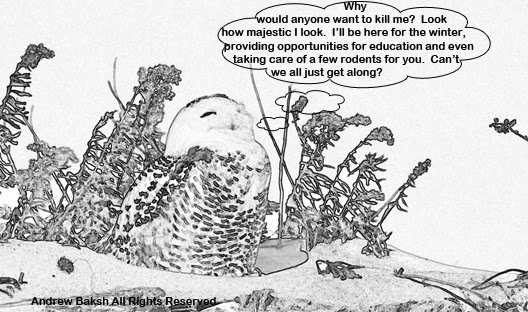 Excellent work all day yesterday by the public and organizations like Audubon NY, NYC Audubon, Jamaica Bay Ecowatchers, coverage from media outlets like the Daily News who broke the story and others got the necessary attention. Did the PA authority came to their senses? Or did someone in Albany make a phone call to the powers that be at Port Authority and expressed their unhappiness. Was it Governor Cuomo? In any event, good sense prevailed and the reaction was swift as late last night the Port Authority released a press statement (only to the media) indicating that they would IMMEDIATELY stop the killing of Snowy Owls at JFK and work with DEC to develop a non-lethal alternative. Here is an excerpt of the Press Release.


December 9, 2013 CONTACT: Port Authority of New York and New Jersey 212-435-7777 STATEMENT FROM THE PORT AUTHORITY ON SNOWY OWLS “The Port Authority is working with the New York State Department of Environmental Conservation to move immediately toward implementing a program to trap and relocate snowy owls that pose a threat to aircraft at JFK and LaGuardia airports. The Port Authority’s goal is to strike a balance in humanely controlling bird populations at and around the agency’s airports to safeguard passengers on thousands of aircrafts each day. Over the past two weeks, five planes at JFK, Newark Liberty and LaGuardia airports were struck by snowy owls that have been migrating to our region in far higher than typical numbers this year.”

This is great news and I hope that it extends beyond John F. Kennedy to our other local airports as well. Stay alert and remember to make some calls to thank those organizations and politicians who stepped up and did the right thing.

Posted by BIRDINGDUDE at 10:16 AM 1 comments

Audubon NY and NYC Audubon Steps in to Save Snowy Owls at JFK...

Birders, photographers, naturalists and all those who love wildlife should be pleased to know that officials from both Audubon NY and NYC Audubon worked feverishly behind the scenes this morning to get the NY/NJ Port Authority to rethink their management policy of Snowy Owls at John F. Kennedy Airport.

I learned moments ago that officials from both Audubon offices will follow up tomorrow with the Governor's office, Port Authority and DEC.  Let us hope they are able to develop a workable non-lethal alternative.

I thank Audubon NY, NYC Audubon, Governor Cuomo, Port Authority and DEC for listening and taking the necessary steps stop the killing.   Give them a call tomorrow if you can my dear readers and let them know how much you appreciated the work they did and will do.

To all you birders, photographers, naturalists and anyone else who took the time out from their daily schedule to get involved with this issue.  I thank you on behalf of all Snowy Owls.  Stay alert!

Posted by BIRDINGDUDE at 10:28 PM 0 comments