Last night, I reported two banded Ring-billed Gulls to the banding station in Quebec Canada where there is an ongoing research program on the ecology of Ring-billed Gulls. Both birds were documented on Sunday 2-15-15, while studying gulls in Brooklyn and Queens NY.  This morning, I received word from Professor Jean - Francois Giroux who sent me information about both birds, which were both banded in Quebec, Canada.

This banding program, is a joint effort conducted by researchers from the University of Quebec in Montreal CA, Massachusetts Institute of Technology and Massachusetts DCR as part of a study on the dynamics and movement of Ring-billed Gulls in NA.

My sighting of B1XK, is the 2nd US entry in the summarized history of this bird and gives us an idea on how these birds move seasonally. My report of BMJM, is the 1st US entry in the summarized history with the other 3 reports all coming from Quebec Canada.  Keep an eye out for these and any other banded RBGUs, your observation could be the next entry. Our reports of banded birds such as these Ring-billed Gulls are invaluable data to the researchers. 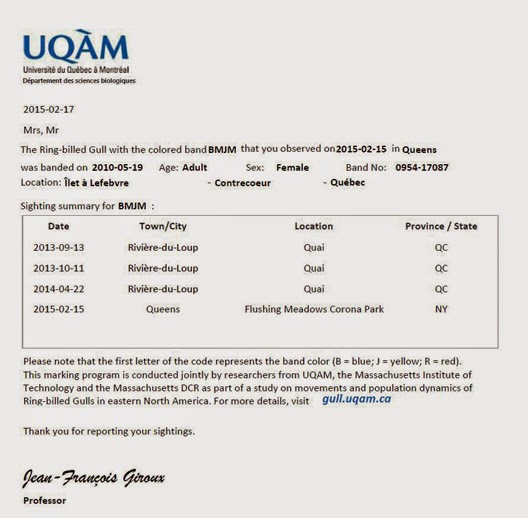 Posted by BIRDINGDUDE at 12:20 PM 0 comments

Breakthrough In The Evolution Of Beaks In Darwin's Finches

Apparently the genetic code behind the evolution of beaks in Darwin's Finches was found according to Journal Nature which published an article on February 11th. The article, referenced the research conducted by Leif Andersson from Uppsala University in Sweden and a team who sequenced the genome of 120 birds belonging to the 15 species of Darwin's finches.

Posted by BIRDINGDUDE at 11:56 AM 0 comments