Clay-colored Sparrow - what to look for

One of the toughest spizella identification challenge familiar to many NY birders, is with separating fall and winter Chipping from Clay-colored Sparrows. Sometimes, you might get lucky with that one bird that has all the field marks that stand out but more often you will be presented with views of a bird where it is tough to make the distinction and nail the ID.

Here we have two spizella candidates. The one on the left is an obvious Chipping Sparrow. Right...or maybe not. What do you think? What about the bird on the right?  This is the dilemma many birders face when having obscured views.

Experienced birders have shared some of their observations online and in some birding literature.  For example, using the details around the eyes of both birds to make a distinction has been discussed by some such as David Sibley. Where Chipping Sparrows shows the eye arc above and below broken by a dark line on both front and back. Clay-colored Sparrow, does not show that; hence, what some term the "open face" look. That, is a very useful field mark but what else could one use in the field?

Others have also referred to other field mark nuances such as the size and color of the gray nape on a Clay-colored vs Chipping as a way to make the distinction, the lines that run along the sides of the crown onto the nape and the clear lores of a Clay vs the marked lores of a Chipping.

There are many things to look for in distinguishing the two. Here, I will share with you a few tips that I find helpful when comparing the two in the fall. Lores on a Chipping will be dark, while it is pale on a Clay-colored. Nape on a Chipping Sparrow will be brown or brownish with dark streaks, while it would often be grayish with much paler streaks on a Clay-colored Sparrow. Some other field marks to pay attention to include the color of the ear coverts as well as the moustachial stripe.

Using some of these field marks coupled with your own experience should help you in the field.  Keep in mind that there is a lot of variation in Chipping Sparrow; any candidate for Clay-colored Sparrow, that is not a slam dunk should be carefully studied before making the call.

Share some of your experiences on what you look for when studying a flock of Chipping Sparrows in trying to find that rare Clay-colored Sparrow. Were you successful? What were the ID clinchers?

Posted by BIRDINGDUDE at 9:54 PM 1 comments

Migration, whether spring or fall, provides a great opportunity to entice birds that you would not ordinarily have in your garden. It has certainly helped to bump the number of bird species observed in the backyard. I have been rather fortunate to record (all with photo documentation) a number of very good birds such as Eastern Meadowlark, Yellow-bellied Flycatcher, Yellow-billed Cuckoo, Hooded Warbler, White-winged Crossbill and Evening Grosbeak to name a few. On November 4th, I recorded number 120 for the list of birds seen in the backyard.

This bird was one I thought I had a shot at albeit a long one and I was thrilled at confirming that the bird that I saw with my naked eye, which I thought was paler in the face than the rest of the House Sparrows, was none other than a DICKCISSEL. It is the second one that I have found in Queens, this year in a matter of weeks, the other one about a week ago at Big Egg Marsh in Queens.  Today, made it 3 consecutive days that this Dickcissel was seen; I hope it sticks around. Perhaps, attracting other uncommon to rare birds to stop in at the feeders. At 120 species, who knows what will be my next new yard bird. Any guesses?

Posted by BIRDINGDUDE at 9:55 PM 1 comments

A Tailless DICK in Queens NY

DICK, in the birdwatching world, is a four letter bird banders code for Dickcissel (Spiza americana). This is not a common bird for us in the NYC metro area and our best shot at finding one is often during the fall migration. It just so happened that I stumbled upon one at Big Egg Marsh in Queens NY on October 28th.

This was an interesting looking Dickcissel made so by the fact that it was not well marked and tailless. In studying the plumage, this bird appeared to be a 1st winter Dickcissel. The braces on the back looked pale and the plumage included slight streaks on the chest heading towards the flank. Coupled that with its drab look made for an interesting study in the field. A good bird for Queens and a first for me at Big Egg Marsh. Some photos are provided for studying. 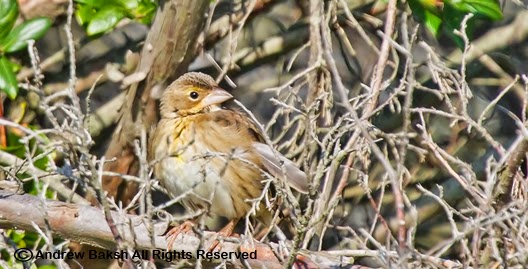 Posted by BIRDINGDUDE at 11:51 AM 0 comments