Troupial shows up in Roslyn NY... 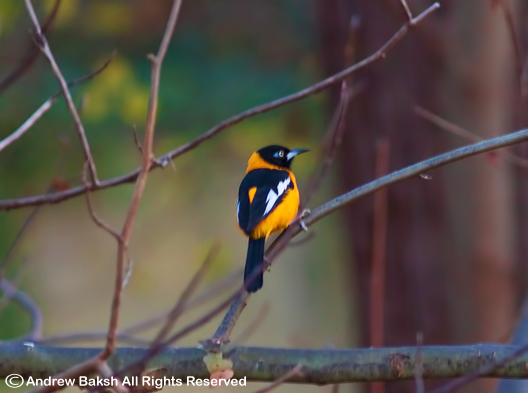 I received a call from Eric Miller this afternoon who indicated that our friend Mary Normandia had seen a strange looking Oriole at Gerry Pond Park in Roslyn NY.  Eric went to check out the bird and realized it was not one of our common Orioles, but was unable to nail down the ID.  When I spoke to Eric and understood that the bird was yet to be identified, I decided we had to get photos of the bird to review.  I arrived at the location with light fading, but managed to see the bird and get some documentation photos. Later, I received a call from Eric who had figured out the ID.  It was a Troupial (Icterus icterus), a bird from Venezuela; it is also found in Puerto Rico, the Virgin Islands (St. Thomas, Water Island and St. John), Antigua, Dominica and Grenada as a result of introduction.  I am sure how this bird got here will be discussed, with many to chalk it up as an escapee.  In any case it is a very good looking bird.  If you do try to go and see this bird, please refrain from chasing it around to get "spectacular" photos or to get that "good look"; stay at a respectable distance thus, allowing others to have a chance at seeing this bird. 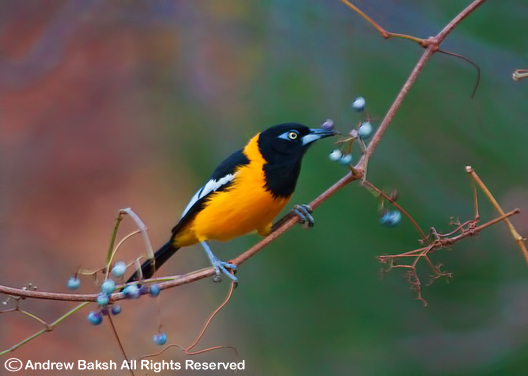 Posted by BIRDINGDUDE at 9:58 PM 12 comments 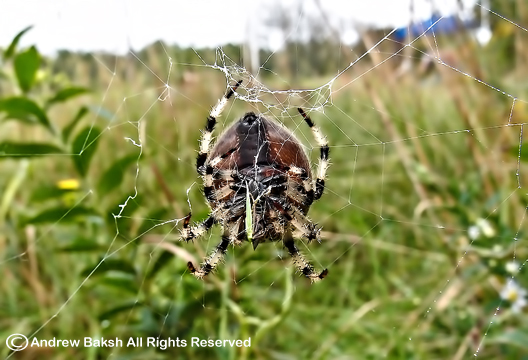 Posted by BIRDINGDUDE at 7:13 AM 1 comments

Other than those days when a good migration flight occurs, it is the time of the year where on some days birding could get slow.  However, there are birds around as evidenced by the number of rarities being reported; plus, there are few not so rare but still good birds to get late in the season like the ones I found last week in the Bronx.  After my Van Courtlandt Park walk last Saturday, I decided on continuing to bird the Bronx.  My first stop was at Pelham Bay Park where after a bit of poking around I found a very cooperative Orange Crowned Warbler (Vermivora celata). 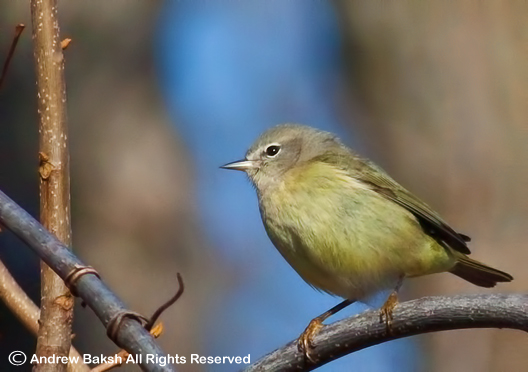 This was a first for the Bronx for me and I was pleased as it was one I was looking for.  After getting a few photographs and observing the bird feeding, I scoped the cove for a bit finding both Red-throated and Common Loons.  After making a few passes and counting the waterfowl, I decided to leave.  On my way out, I decided to bird the same area where I had the Orange Crowned Warbler, the habitat looked promising and so I went off trail poking around.  My hunch paid off;  About 20 minutes into my exploration, I spotted some bird activity in the distance, they were American Robins.  I got excited because they were more Robins than I had seen in awhile (yes, I still appreciate all of the common birds).  Closing in on the location, I realized that they were active near a patch of Porcelain Berries. 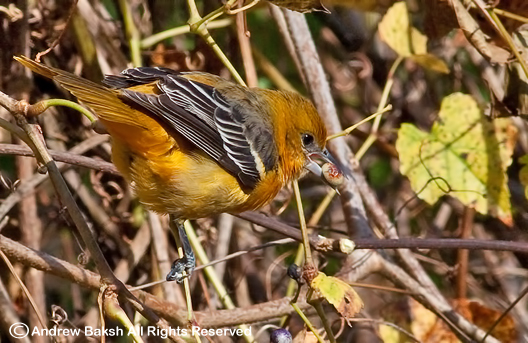 As I stood watching the Robins feasting, a bird that was not a Robin flew into a nearby section of the berries and began to eat.  It was a Baltimore Oriole (Icterus galbula).  I put the scope up and began to get some digiscope shots.  This was a good bird to get this late I was thinking.  Then as I continued to bird the area, I found 2 more Baltimore Orioles and a surprising female Scarlet Tanager (Piranga olivacea).  The later was quite the surprise and I carefully reviewed the field marks to ensure that I was not looking at a vagrant Western Tanager. 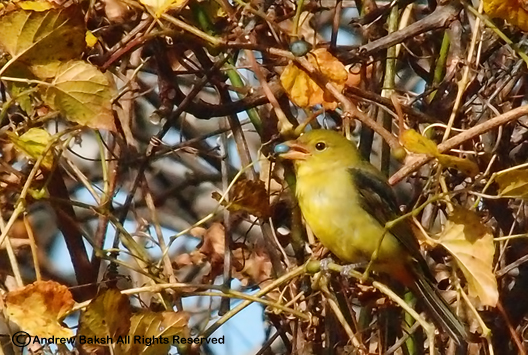 All of these birds were seen in close proximity to each other in an  area that had a lot of Porcelain Berries, an invasive by native plants standards, but nevertheless a valued food source for the birds.  Having some success at seeing these birds this late in the season, got me to thinking about how much work is still needed to understand our own local patches and realized that I've got my work cut out for me. Later on at Orchard Beach in the Bronx, my highlights were a Red-necked Grebe (Podiceps grisegena) working offshore in the midst of a couple of Horned Grebes and a Peregrine Falcon bathing in a puddle in the parking lot.

Posted by BIRDINGDUDE at 8:16 PM 3 comments 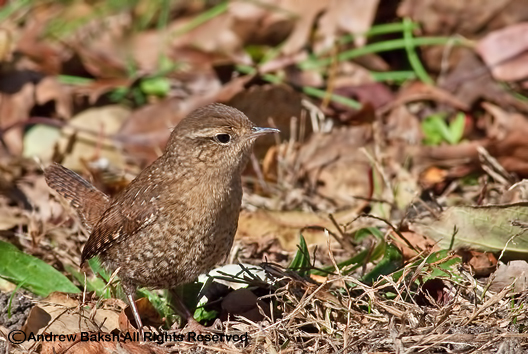 Posted by BIRDINGDUDE at 6:32 AM 0 comments 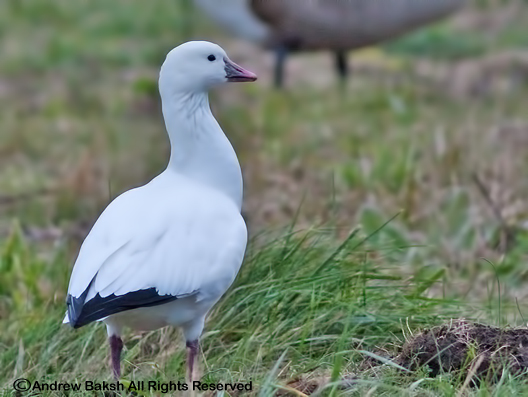 Posted by BIRDINGDUDE at 6:09 AM 0 comments 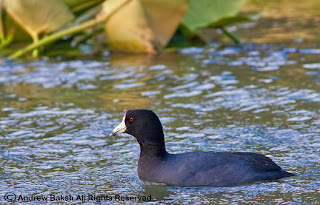 I got to Van Courtlandt Park before our walk to scout out the Greater White-fronted Goose (Anser albifrons), that we had last week.  I wanted to ensure that if it was still around we had a shot at seeing it again.  Sure enough, the bird was in the North West corner of the parade grounds in the fenced in area.  Once our group assembled, we keyed in on the GWFG enjoying close up views.  After we had our fill of the  Greater White-fronted Goose (Anser albifrons), we then headed towards the VC Lake.  We moved quickly with a purpose; there was a cross country event taking place, so we were trying to get ahead of all the running before the birds were flushed.   Near the marsh, we had quite a number of wet spots good for Snipe, but did not find any; I am willing to bet that all the cross country running through the trails does not help at all.  I wish that some of these trails were off limits to running as it would be less disturbance for the wildlife.  We took one of the back trails around the marsh working our way towards the lake; the rattle then flight of a Belted Kingfisher alerted us to its presence and a flock of flyover American Goldfinches were all the action we had on that trail.

Once at the lake, we scanned for waterfowl and picked up Northern Shovelers, Ruddy Ducks and Pied-billed Grebe.  We then backtracked around the marsh area taking another trail that would bring us near the golf course.  We picked up a Male Hooded Merganser as it took off from near the shore and shouted out to another birding group (Brooklyn Bird Club), to get on it - they did.  Continuing on we picked up American Coot and Green-winged Teal tucked up against the phragmites.  Both birds were well hidden and it was not easy to see them but putting the spotting scope on the birds, I was able to get most folks on the two.  We continued on making our way back out towards the parade grounds, picking up Winter Wren, and some other dickie birds.  Once at the parade grounds we looked carefully for the Greater White-fronted Goose (Anser albifrons), but the Canada Geese flock had gotten smaller and the GWFG was no longer on the field.  This was too bad as one of our attendees who missed it by arriving late the previous week missed it again because of arriving late - got to get to the walks earlier Lenny.  From the parade grounds, I took our group to the restoration area where we picked up many birds working the wet grounds.  Our best bird from that area was a Field Sparrow, a first of the season for the group.  In the end we managed 37 species. See below for a complete list.

Posted by BIRDINGDUDE at 8:58 PM 0 comments 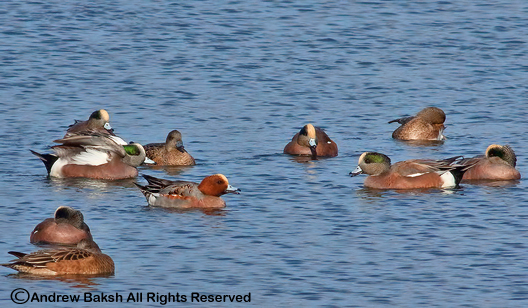 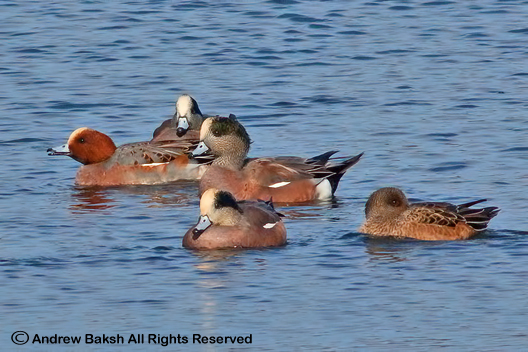 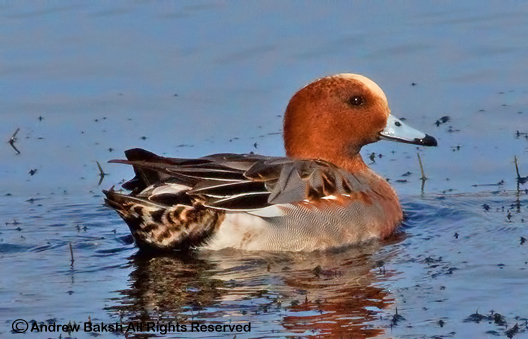 Posted by BIRDINGDUDE at 6:25 AM 6 comments 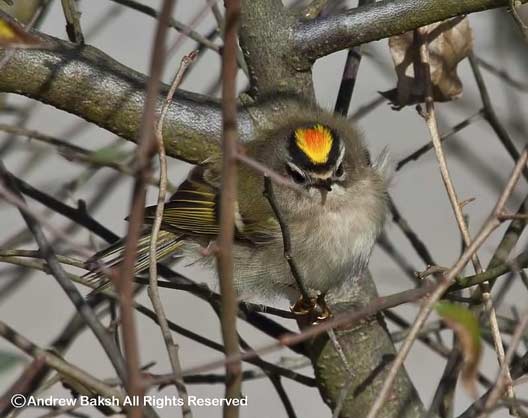 Posted by BIRDINGDUDE at 6:05 AM 3 comments

After a disastrous shorebird season and a lack of rarities at Jamaica Bay, we finally had a decent bird in Eared Grebe (Podiceps nigricollis).  Found initially by Anne Lazarus and her group.  The Eared Grebe was re-found and its ID confirmed by Patrician Lindsay, Steve Walter and I on November 5th.  I was able to get a documentation shot of this Grebe on the bayside of the West Pond as it associated with Horned Grebes (Podiceps aunitus). 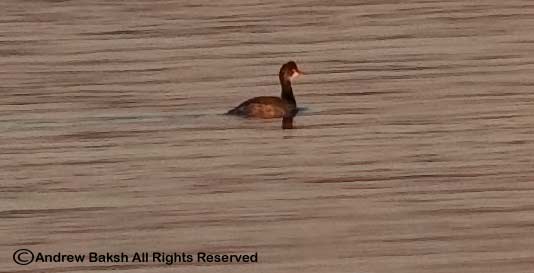 In winter plumage, identifying Eared among Horned Grebes can get rather tricky especially when viewing from a distance, with less than ideal conditions such as poor light and or choppy waves.  However, there are many characteristics that have been identified and written about by seasoned birders that could help in getting the ID correct.  Here are a few that should help in the field:

Posted by BIRDINGDUDE at 7:55 PM 4 comments 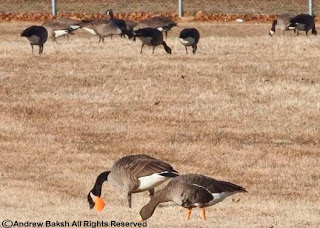 Our Van Courtlandt Park group met up at our usual spot, the nature center near the parade grounds. We began our walk by scanning the fields for a Greater White-fronted Goose (Anser albifrons) that was seen earlier in the week at the park. On our first pass, we did not find the GWFG; however, as we crossed the field heading north east towards the Van Courtlandt Park Lake I decided to scan the furthest end of the field and found our bird. The Greater White-fronted Goose was tucked in behind a couple of Canada Geese and it was the leg color that alerted me to its presence. Soon it came out into view and I got everyone in our group on the bird. It was pretty exciting for our group since none of them had seen one before. Jennifer a new attendee was especially thrilled at seeing a GWFG for the first time. After having our fill of the GWFG, we birded along the lake adding to our day list. While the birds were not plentiful we added a bird here and there. A Hairy Woodpecker (Picoides villosus) teased us with fleeting looks and a White-breasted Nuthatch came in and stole the show, enthralling everyone with closeup views. A couple of Pied-billed Grebes (Podilymbus podiceps) on the lake were new arrivals along with a couple of Ruddy Ducks (Oxyura jamaicensis). We worked our way back to the restoration area and noticed how many trees had taken a hit from the storm we had a few weeks ago. The marsh area in the restoration area was all matted down from the snow we had and there were very few birds there. Nevertheless, we did manage to pull out a few Swamp Sparrows (Melospiza georgiana) and a Ruby-crowned Kinglet (Regulus calendula) from that area before wrapping up our walk. Despite a paucity of birds we managed 37 species. See below for a complete list.

Posted by BIRDINGDUDE at 11:50 PM 0 comments 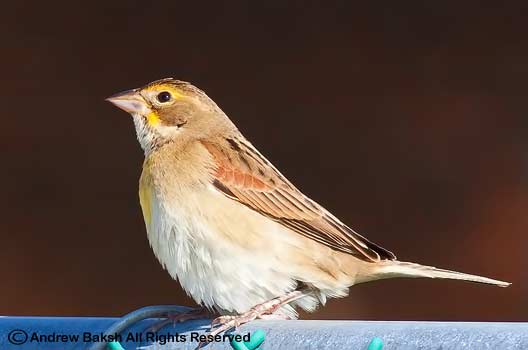 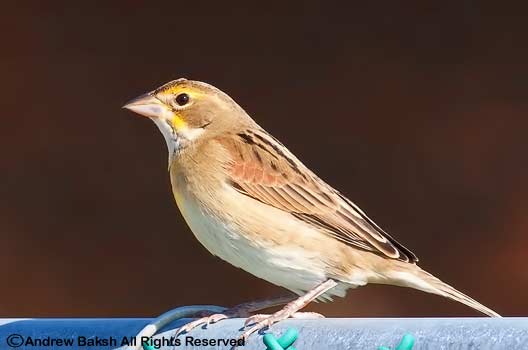 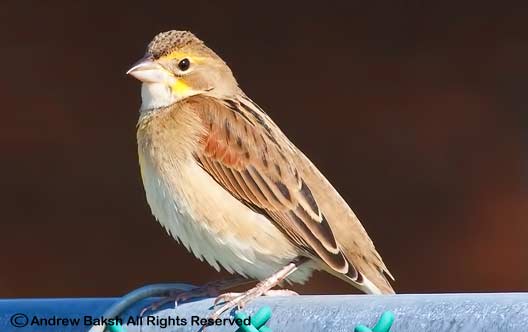 Posted by BIRDINGDUDE at 6:12 AM 1 comments

On October 23rd I posted a photo of a flock of shorebirds and challenged my readers to take a crack at identifying the species. 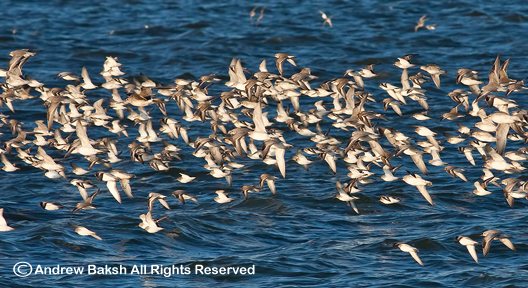 Here is the answer: There are 7 species in this flock of shorebirds. Sanderling, Red-Knot, Ruddy Turnstone, Dunlin, Black-bellied Plover, American Golden Plover and Hudsonian Godwit. 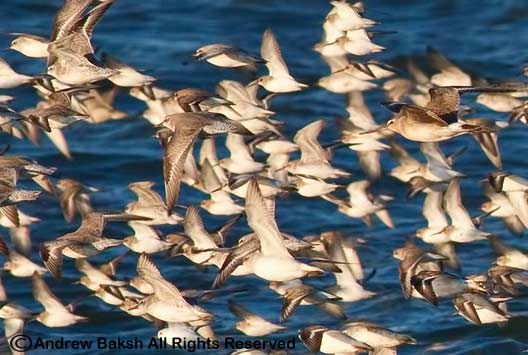 Now, that I have listed the species and provided a cropped photo for a closer look, the juvenile Hudsonian Godwit is now easily seen. Try and see if you could find the others; the American Golden Plover is in this cropped photo.

Posted by BIRDINGDUDE at 8:55 PM 1 comments 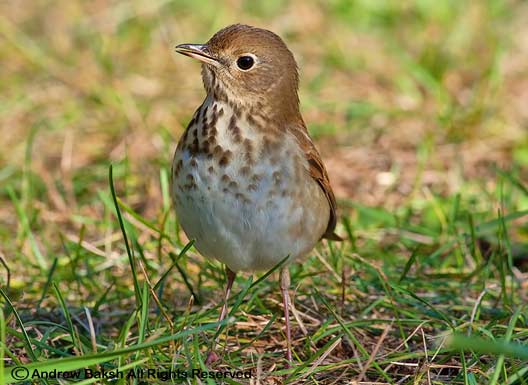 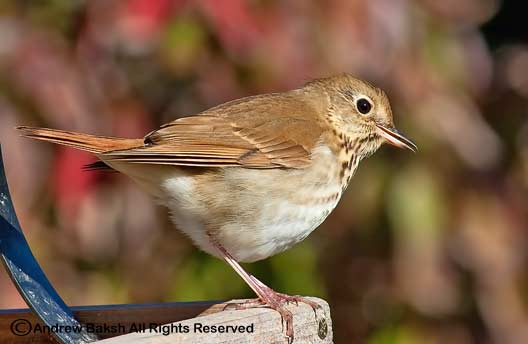 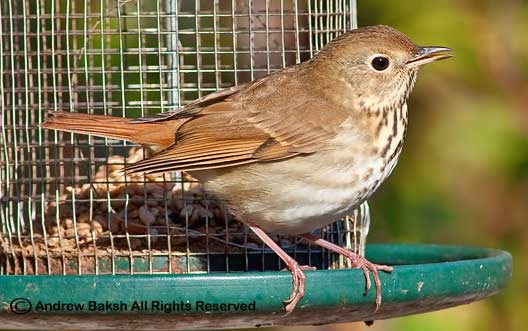 Posted by BIRDINGDUDE at 6:56 PM 1 comments