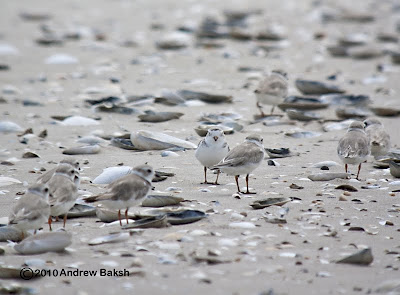 Piping Plovers at Breezy Point Queens NY
Yesterday, after doing a stint on the West and East Ponds at Jamaica Bay Wildlife Refuge, I headed out to Breezy Point for some volunteer work. Readers will remember, last summer I had Piping Plover nest duties and this year I have done some of the same. It was a good Plover day as I counted 47 Piping Plovers (Charadrius melodus). More exciting though was the sighting of 2 banded Piping Plovers whose band colors were consistent with those used on Plovers that were banded in the Bahamas.

PIPING PLOVERS COLOR-MARKED IN THE BAHAMAS – In an effort to determine where Piping Plovers wintering in The Bahamas are staging during migration, and breeding, 57 birds were uniquely color-marked this winter in The Bahamas for Environment Canada by Sidney Maddock and Peter Doherty, with help from The Bahamas National Trust. Each bird has a black flag (band with a tab sticking out slightly) on the upper left leg, nothing on the upper right, a single color band on one lower leg, and two color bands (which can be the same color on top of each other) on the other lower leg. Colors used included: red, orange, yellow, white, light green, dark green, dark blue, and black (Source: Peter Doherty) 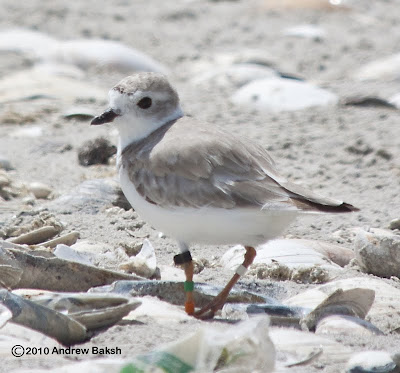 Banded Piping Plover (Bird #1)
This afternoon Peter Doherty and Dr. Cheri Gratto-Trevor who are directly involved with the initiative, confirmed that the two birds I reported were indeed banded in the Bahamas. I learned that Bird # 1 was banded by Sid Maddock and Peter Doherty for this project at South Blanket Sound Flats, North Andros Island, The Bahamas, on 14 Feb 2010. Bird # 2 was also banded by Sid and Peter on February 10th, at the same location as the one above. It appears Bird # 2 has been at Breezy Point for a bit as, it was reported on the 26th of June by Brooklyn Birders Heydi Lopes and Rob Jett. Bird # 1, well…there is some uncertainity on previous sightings due to documentation, but it could have been seen as far North, as Newfoundland. 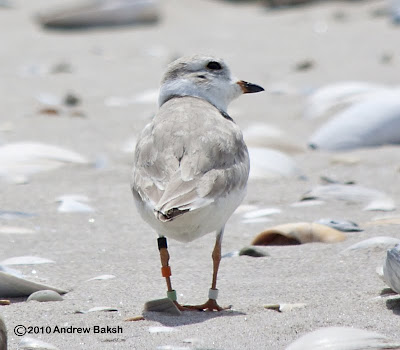 Banded Piping Plover (Bird #2)
With these 2 birds we now have records of three sightings at Breezy Point (thrilling stuff for the Piping Plover team at Breezy). In the spring, Piping Plover volunteer Avi had the first Breezy Point sighting of a Piping Plover banded in the Bahamas. To date, I believe we have reports of 38 re-sightings of the 57 banded and # 39 may have been recorded today. Birder Shane Blodgett found one today somewhere out on LI and called me this evening about his sighting (I have published one of his photos below). I am sure once verification is confirmed on Shane’s bird, Peter will post an update.  Shane's find, if new could bring NY sightings to 13, one behind MA, where 14 sightings have been recorded. 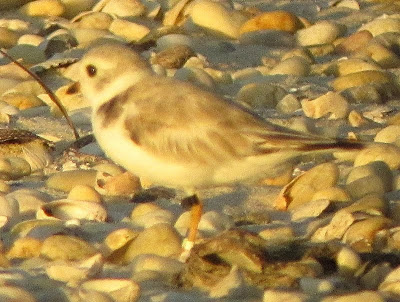 Piping Plover photographed by Shane Blodgett on 7-23-2010
More Bahamas banded Piping Plovers are being re-sighted each day. Each observer who has made a re-sight has been thrilled with their discovery (Just like I was). Birders, plover monitors and beach walkers should remain alert for Bahamas plovers and to report their sightings as explained here.

Posted by BIRDINGDUDE at 9:58 PM

They almost look a little hippy-like with their color bands! I hope it doesn't bother them too much.

I saw 2 Plovers inland at the Elks Lodge in Port Jeff Station. They were in the construction driveway to the right of the Elks building. I never knew they came in off the beach! They are so cute but with all the road construction going on here on Route 112, they are bound to get hurt.

Hey, while monitoring the Piping Plovers in the Arverne (Rockaway Beach) site I saw your Bird #2, (Left: black flag, orange, light green - Right: white). Still waiting to see if he/she will nest in the area!