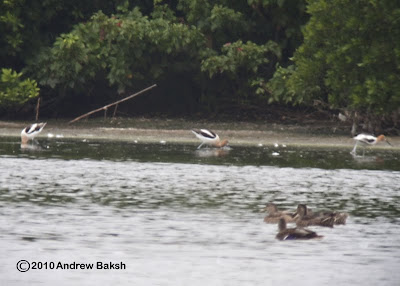 American Avocets on the East Pond at Jamaica Bay Wildlife Refuge
Taking a gamble that I could get in some birding before the thunderstorms hit the area, I birded Jamaica Bay Wildlife Refuge starting on the West Pond and ending on the East Pond. I ended with a 75 day species list that included 15 species of shorebirds. Shorebird highlights included Western Sandpiper (1), Stilt Sandpipers (7), Pectoral Sandpiper (1) and American Avocets (3). 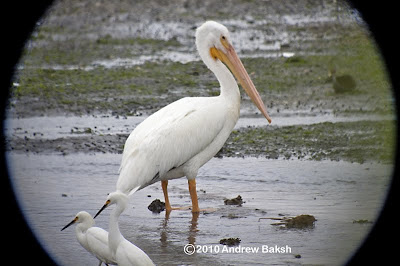 American White Pelican at Jamaica Bay Wildlife Refuge.
As if that was not enough for a good day in the field. National Park Service Rangers, Julia Clebsch and Neena Mohammed found an American White Pelican (Pelecanus erythrorhynchos) while on assignment at the North Channel Bridge. The rangers were there for a Turtle release and to monitor the valve where water, is flowing from the East Pond as part of the water level lowering. Talk about being in the right place at the right time - I joined Julia and Neena and was able to observe and photograph the bird. 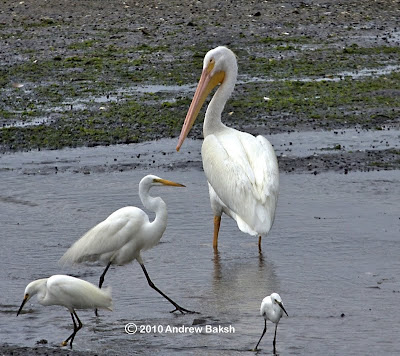 American White Pelican at Jamaica Bay Wildlife Refuge.
Later on, a couple of Long Island birders (known as the Jones Beach Boys) who had responded to my earlier RBA (rare bird alert) post on the Avocets, arrived and were told at the refuge about the White Pelican. In addition, to seeing the Avocets, they were also able to add the White Pelican to their year list. I hope both the Avocets and Pelican stick around for other birders to see them. Maybe this is a good sign of even better sightings to follow at Jamaica Bay. Stay tuned…
Tags:

Posted by BIRDINGDUDE at 5:03 AM

Nice. Haven't been out there in a month or more. Must return soon...

Very nice captures on the rarities. Would love to see these species come here to Maine!