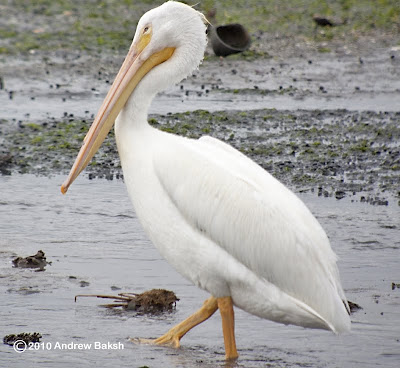 American White Pelican
After reporting the American Avocets and American White Pelican on the 15th of July at Jamaica Bay Wildlife Refuge, the very next day a Hudsonian Godwit was found by birder Tom Fiore. That day, to my knowledge only 3 of us got to see that bird, Tom, Bobby Kurtz and I. No one, was able to relocate that bird in the afternoon and throughout the weekend, no one reported seeing it. 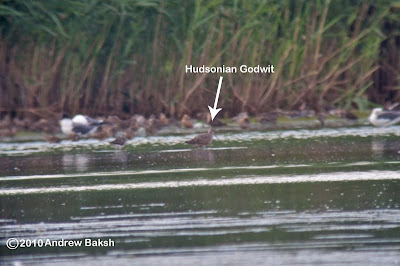 Hudsonian Godwit
On Monday July 19th, I found a Hudsonian Godwit around Sanderling Point on the East Pond at Jamaica Bay. This could very well be the same bird that Tom had found last week or an entirely different bird. The bird seemed to like the area around Sanderling Point on the pond and that made for very difficult views. However, I was able to pick it up from the North End and as well as from the Overlook at Big John’s Pond trail, which is down the South End. Both looks were distant and with shimmer it made spotting quite difficult. However, if the light is just right, one could get decent looks of the bird; this was the case on Tuesday as birders Stella Miller and Sam Janazzo were able to get on the bird from the Overlook in overcast conditions. Yesterday, I walked in from the North End of the East Pond up to the infamous cove and saw the bird again. 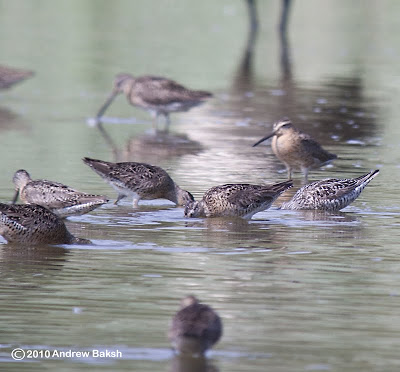 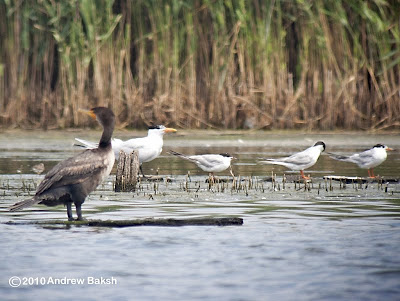 The left most Tern - Royal Tern on the East Pond
An unusual sight was a Royal Tern on the East Pond as well as a Bonaparte Gull that I found minutes after digiscoping the Royal Tern. Both birds were seen on the 17th. The Royal has not been reported since, but I saw the Bonaparte on the 18th. Who knows what else may show up, I just hope that I could be there so that I could then, share my experience and photos with you. Stay tuned for my next report from the field…
Tags:

Posted by BIRDINGDUDE at 4:54 AM