A day of conservation work and birding… 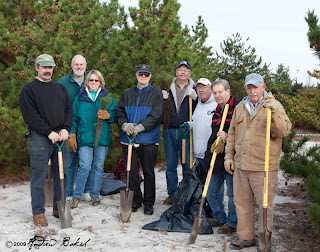 When my friend Shai Mitra, posted about a planting project at Jones Beach State Park NY, I immediately signed up. The project was to be led by Ed Coyle, a birder and photographer enthusiast and was scheduled for November 21st and 22nd. The initiative, was to replenish the dwindling stands of Japanese Pitch Pines with native pitch pine seedlings in the hopes that if enough took, they would fill in the area known as the West End. The West End Area at Jones Beach has small stands of trees, which provides important habitat for many bird species including wintering Owls. On November 21st, I joined 8 other volunteers and together we planted seedlings around the Coast Guard Station and along the medium around the West End area. 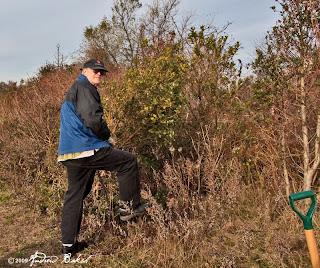 As it happened, I ended up teaming up with naturalist and fellow NYC Butterfly Club member, Rich Kelly; together we planted over three hundred seedlings. The final number for Rich and I being 350 seedlings planted, give or take a few. We had a good chuckle over this as it was a good story for Rich to rib many of the members of our NYC Butterfly Club, on where they were they on such a day of volunteerism. The small but enthusiastic group did such a good job at planting that Ed, had to hold back a few bundles of seedlings in order to keep plants for those volunteers that had signed up for the following day. 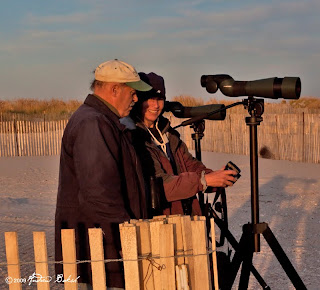 Following the planting, Rich and I decided on a bit of birding. Our first stop was at Point Lookout in search of a King Eider that was reported the day before by birder Ken Feustel. We had one false alarm when a Common Eider was mistakenly taken for a King, but as it got closer the ID was confirmed, so no King. Following Point Lookout, we went to field 6 at Jones Beach in the hopes of finding Black-legged Kittiwakes that were reportedly streaming by in good numbers earlier that morning. At field 6, we picked up lots of Ocean activity, but no conclusive looks at Kittiwakes. While there, Tom Burke called and told me that he had just seen about 6 Black Legged-Kittiwakes in close at Point Lookout. I conveyed the message to Rich and we hurried back over to Point Lookout. Once at Point Lookout, we joined Tom and Gail Benson and conducted our vigil for Kittiwakes. 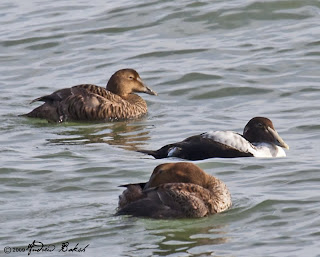 We had some distant looks at Kittiwakes, but nothing as close as Tom had earlier. While scanning for Kittiwakes, we picked up and had nice looks at a first cycle Iceland Gull. We also had fascinating looks at a Seal who seemed to have much better success at fishing than the local fishermen; first, landing a Flounder and then a huge Stripe Bass. We stayed for a while enjoying the Ocean view counting the Scoters, Gannets and other birds. Soon the light began to fade and Rich decided to leave. Tom, Gail and I continued to bird for another hour or so enjoying some Common Eider that were in close, but we eventually called it a day and headed our separate ways. It was a satisfying day of conservation work and birding.

Posted by BIRDINGDUDE at 5:59 PM