Grace's Warbler - How IT Unfolded...

I have written the following in a style that I hope my readers find easy to follow and vicariously live the event that led to what could be the State's first record of a Grace's Warbler. Many thanks to the well wishers especially Angus Wilson who was generous with his praise and thanks to all who were there for the spectacular find.

It began in the parking lot when Seth Ausubel our team leader began discussing how we would divide up the area we needed to cover for the Atlantic area of the Southern Nassau Christmas Bird Count. We had just completed doing our seawatch duties and now needed to work on picking up land birds. The Rock Pile and edges of the parking lot at Point Lookout were all up for grabs. I asked to work the Pine Groves across from the parking lot because I wanted to take a crack at Owling. Seth agreed that he and Patricia Aitken would take the parking lot edges and Doug Gochfeld and I would do the Pine Groves and Rock Pile and then we would decide on how we would tackle the rest.

Before we parted ways, Doug retrieved a couple of 2 way radios, one which he kept for himself and the other for Seth. It was a good method to communicate with since cell phones often suffered from drop signals. On our way to the Pine Grove, Doug decided to call odds on how many passerines we would find. The number we worked with was “7”, I took under leaving Doug with over.

Doug and I made our way to the edge of the Pine Grove and we both began pishing softly to see what birds we could kick up. The chip note of a Song Sparrow responded and then we had movement on one of the pines in the top. We both spotted the movement and tried to key in on the bird. It was a small bird and obviously a warbler. I caught a flash of yellow and muttered, “What do you think…Pine?” (referring to Pine Warbler). Doug by then had begun to try and get photos and I decided to do the same. The bird kept in the shadows of the tree tops and gave only teasing looks. Should we let Seth know I asked? Doug then got on his two way radio and radioed into Seth that we had a possible Pine Warbler. Seth's response was “good bird” and then dropped off. We pished some more and the bird came out further into the open and we took additional photos. Then, we both began looking at the photos that we had taken. Something was not right, about this bird but I could not put my finger on it. Yellow-throated Warbler? No, I did not think so. Doug by then had cycled through a few images and then said casually, “This looks like a Grace’s Warbler” (Setophaga graciae) What? No f@#% way was my response. Are you sure? We both turned back to look at the bird some more but it had dropped out of sight.

There was some silence, and then Doug asked if I had a field guide on me. Back at the truck I responded. I asked if I should get it, but Doug shrugged it off and suggested we continue birding. We continued on to the right of where we had the bird and into the grove, but it was obvious we were both preoccupied with this bird. I could not muster any images in my head that matched what I had blown up on my camera. A few minutes had elapsed during which we flushed a Brown Thrasher, which I managed to get on and then Doug who had returned to looking at his images said. “I think we need a field guide”.

The excitement began to build, as I stumbled back to the truck and retrieved my small Sibley’s Field Guide which I handed off to Doug, the problem was, it was of the Eastern Birds. Damn it I thought as I completely blanked that I had the big Sibley’s buried under all of the shorebird guides I normally take around with me. I somehow managed to find my National Geographic Guide and handed that off to Doug, who by then had also taken a peek at Pine Warbler, in the Eastern Field Guide. Doug looked at the National Geographic Field Guide and shook his head in the affirmative; it has to be a Grace’s. No doubt Doug's experience with this species in Arizona helped, but having the images on camera to look at and study with a Field Guide was invaluable!!!  I looked at the image in the guide and on my camera and my heart raced even faster, the realization began to sink in that we had probably landed a MEGA! But wait! I wanted another person to validate this find. Seth…, we had to get him on this bird!

Doug radioed into Seth and said, “I think we have a Grace’s Warbler”, you better get over here. Seth’s response and it is a classic was, “What? You had a Pine Warbler that has now turned into a Grace’s Warbler? What is this, a new sub species?” This to me was the best line of the day! It seemed like forever, but Seth finally made it over to where we were; he was prepared, having already looked at images of Grace’s in his Sibley’s. I walked over to Seth and showed him a blown up photo showing the Yellow in the supraloral. With another classic, Seth’s response was “Holy Mother @#$%#%” I knew then it was on! 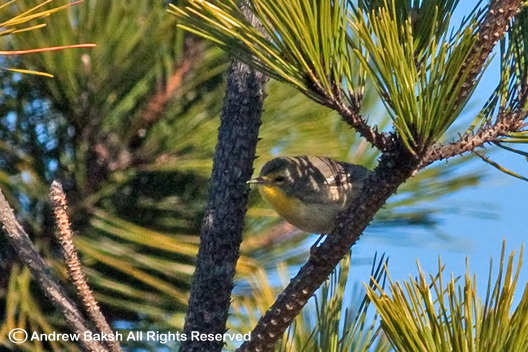 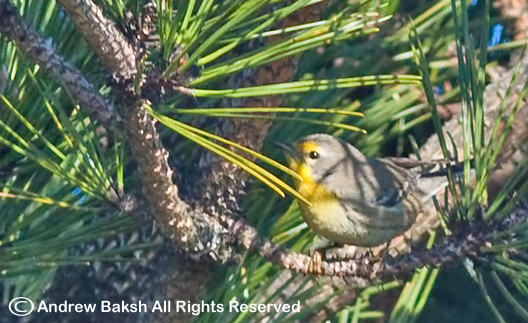 Doug in the meantime confident of the ID, had already gotten Shai Mitra on the phone and broke the news. Seth after a few minutes got on the bird and once again confirmed we had the real deal. The excitement was overwhelming and while Seth and Doug did phone/text/post duties, I kept a watchful eye on the bird which had a tendency to disappear into the pines for minutes. The first to arrive was Doug Futumya and Rich Kelly, followed shortly thereafter after by Shai Mitra and Patricia Lindsay. The bird was not being seen and I could feel folks getting antsy. We were waiting for one other party, Tom Burke and his crew who finally arrived and right on time. As I detected the bird flying left from where we were standing. I shouted out the location but then it dropped out of sight; moments later the keen eyes of Barbara McBrien mother of Michael McBrien (Mr. Gray Kingbird) spotted the bird right where I had seen it flown and finally everyone present at that moment got on the bird. This was key, because if there were going to be any questions on the ID it would come from this group and thankfully all the comments were positive. The deal was sealed!  The word quickly spread and birders arrived in droves; many of them taking a break from their CBC count to chase the rarity, such was the power of GRACE. 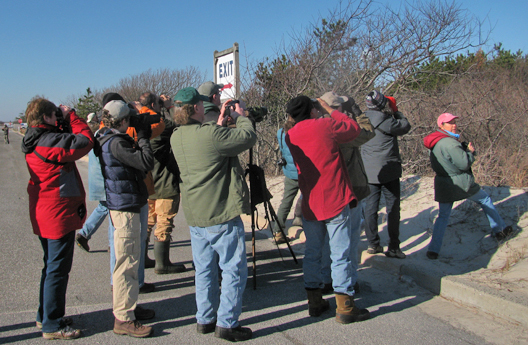 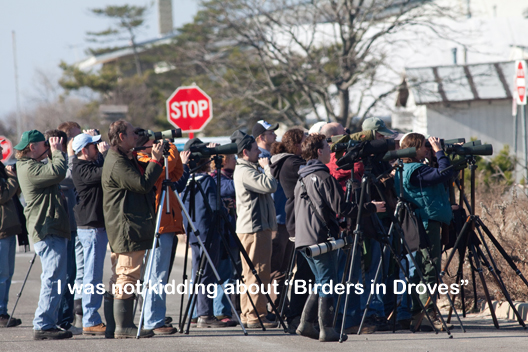 Posted by BIRDINGDUDE at 6:51 PM

I feel privileged to have been a part of this twitch. I arrived about an hour after Seth sent out the e-mail message to the listservs, and had an excellent look at the bird about an hour after that. How fast can a birder drive from Long Island City to Point Lookout? I think all of us who were not already out doing the CBC broke all the speed laws. It was the best New Year's Day party ever!

WOW!! Congrats! Thats so exciting! Nice account of the sighting.
What a wonderful start to your year.
Wishing you and Yours a Superb 2012!
Bird on!

Thanks for the telling of this fantastic find!
Irene Grysman

Nice post Andrew. I think the bird is in fact a new subspecies of Grace’s Warbler - - Setophaga graciae newyawkis.

Great story and great srorytelling! Now if the bird would just appear when I am there.

@Donna - one of the funniest exchanges occurred with my phone call to Tom Burke. Wish I could have taped it. So glad you were able to make it and get the bird.

@Debbie, it will be there. I think you guys will have better luck trying for the bird in the morning. The window from 9-12 seems best when it appears to be more active. Hopefully it is not too windy.

@Hilary, @Irene - thank you, it was a most exciting event.

@Susan - thank you! This was some event!

Excellent post! I actually saw the report of the bird elsewhere and they mentioned your name - I thought, hey, I know who that is! Cool! Congratulations, great way to start the year.

Congratulations Andrew! Fantastic find. I believe I birded Point Lookout a cold winterday years ago with Michael Stubblefield. Must have been 2002 or so.

Andrew -
So glad to get the complete story!
The teaser left me hanging.
I'm making the drive out tomorrow morning for Grace and friends.
Hope she wants visitors!

Cracking find, what a bird.