Here are a couple of interesting images of Shorebirds in December. The photos were taken on December 10th, while birding at the Coast Guard Station at Jones Beach. Birder extraordinaire, Tom Burke who was there with Gail Benson and Bob Shriber, spotted two very interesting birds loafing with the flock of Dunlins (Calidris alpina) and other shorebirds on the sandbar. The first one was a leucistic Dunlin. 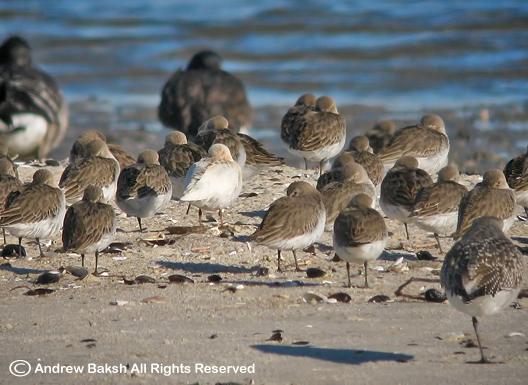 It was too bad this bird stayed tucked in and I was not able to get a digiscope profile shot with its bill untucked before the birds flew away and did not return in the time I was there. Some of you might be wondering what do I mean by leucistic? Well, leucism, or leukism, is an abnormal plumage condition caused by a genetic mutation that prevents pigment, particularly melanin, from being properly deposited on a bird’s feathers.

As a result, the birds do not have the normal, classic plumage colors listed in field guides and usually a leucistic bird ends up with several different looks, such as white patches where the bird should not have any, paler overall plumage that looks faint, diluted or bleached.  Check out this link to a page from the Cornell Lab Feederwatch Program that discusses leucism along with images of a variety of birds with the condition.

The second interesting bird we had that day is a peep deemed to be a Western Sandpiper (Calidris mauri) probably because of the time of the year and the thought that all Semis would have migrated by then. This bird, stayed at the far end of the sand bar and did not get as close as we all would have liked to study it some more. I somehow managed to get a somewhat decent digiscope shot. Take a look and let me know what you think. Pretty small bill for a Western don't you think? However, don't just look at the bill size, think of the base of the bill and body shape. 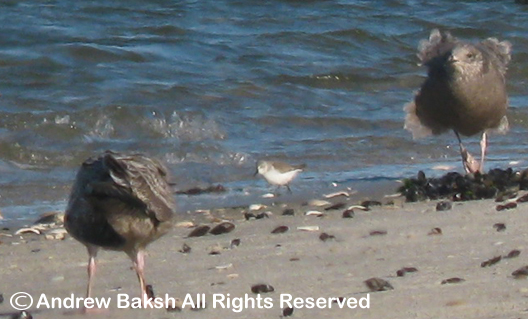 Here is an image where Dunlins are tucked in sleeping. But wait! What are those other larger shorebirds tucked in with them. Well, they are Red Knots! A nice example of "Birding by Impression". 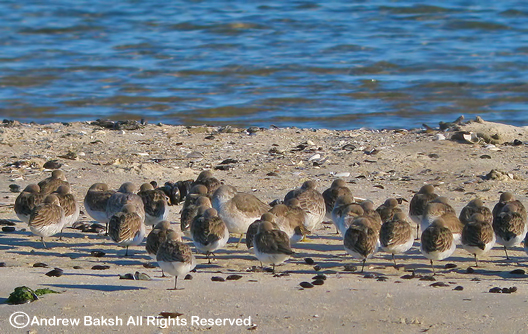 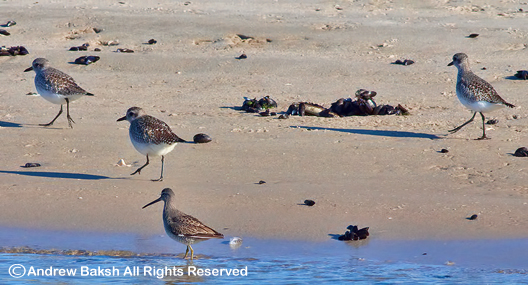 Posted by BIRDINGDUDE at 9:36 AM

Informative as always! I do admire your expertise & dedication!