When I received the invite from Christopher of Picus Blog back in October of 2009, I was surprised, but excited that I would be considered for an invite to the Superbowl of Birding event in Massachusetts. My quick response was a tentative "yes". Things began to fall into place and in a matter of months my tentative became a confirmation and I was set to bird with a power house line-up. 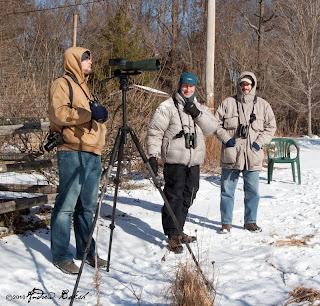 From L-R Corey, Rob and John.

Very quickly, the Superbowl of Birding weekend was here. On Friday, I picked up Corey of 10000birds and after getting the rental van we picked up John of A DC birding Blog, who had taken mass transit in from NJ and we were on our way. As birders do, we had scouted potential birds we could squeeze in along the way and we settled on trying for a Yellow-headed blackbird that was showing up at the Pyrun Nature Sanctuary. Getting this bird, was going to be a long shot, since it had not established a set pattern for visiting the feeders, save for two sightings in the afternoon, but we were going to try. Despite standing around for about an hour and a half we dipped on the YHBB, but had nice looks at many others. Corey was especially happy as he was able to beef up his county (Westchester) list. I also met a friend of mine there, Rob Bates, who was also trying for the YHBB, but even with the extra pair of eyes, this bird was not seen. Note, I did not hear from Rob after we left, so I am assuming that he did not get the bird either.

After Corey had his fill of Westchester county pickups...I mean after awhile. We continued on, picking up many day list species including Red-tailed Hawks and Turkey Vultures. We arrived in MA making excellent time and headed straight to where we would be staying at the Staybridge Suites in Burlington. There, we awaited the other members of our team that included, Christopher, Nate of The Drinking Bird and Mike of The Flower and the Feather . Once they arrived we checked into our room. Coincidentally, we ended up with the same room the team had last year and we all mused whether this was a good or bad omen. Once we drew straws (more like first dibs) on who was sleeping where, we headed out for some birding. 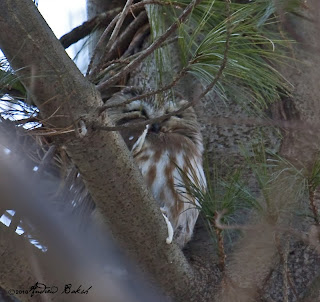 Christopher being the good host had a Northern Saw-whet-Owl lined up for us and we had good looks and photo opportunities. Owls are always cool to look at and this was no exception. For Nate and John this was a special moment as it was a lifer for both. Once the Owl viewing was over, we headed over to another location where after some patience we were rewarded with a really neat bird. One that will have to remain secret until further notice. Then, it was onto dinner and back to the hotel to plan out the strategy for the next day. Next up, "Super Bowl Day."

And, for the record, I only added four to my Westchester list...

Nice shot of the Saw-whet.

@Corey - 4 additions is not bad at all. You and these County lists...do I have some catching up to do.

No word on the Blackbird, but I am keeping my hopes up that it is still around.

Christopher better have something really good lined up next year for the day of arrival. Last year it was a Hawk Owl. This year it was a Saw-whet. He's got some pressure to top those!

@Patrick - Ha, like Christopher needs anymore pressure. I think by now with all the questions Mike and I had after the competition, he knows we are seriously looking to better our numbers :) Watch we don't get an invite next year.

Both Corey and I were hoping for either Thayer's or Slaty-backed, neither which panned out.