Part 1 "On the Road to Massachusetts"
Part II "Luck and Time Management"
Part III "Grace Under Pressure"
Please refer to the above links for Parts 1-3 on on the Massachusetts Super Bowl of Birding.

And now to continue -

We had to keep moving so we pressed on to Salisbury and Newburyport. Christopher, reminded us that we were getting close to areas where he knew Turkey Vultures roosted and it was John who picked them up, our second 5 pointer of the day. We continued on to Salisbury State Park, picking up Bald Eagle, Horned Larks, American Tree Sparrow, Savannah Sparrow and finally Long-tailed Duck, which was picked out by Chris. We missed out on Merlin, Snow Bunting, and Lapland Longspur. An attempt was made to locate Common Merganser at a location that Chris and Nate had scouted and found the day before. Unfortunately, we could not find any - very likely because of the icy conditions. Undaunted, we continued to Plum Island picking up American Kestrel along the way. 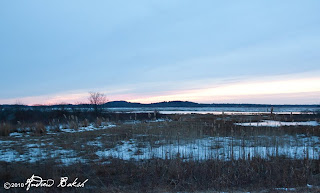 Plum Island Sunset.
At Plum Island, we added Snowy Owl and Rough-legged Hawk to our list and tried hard for a Northern Shrike, but all we got were Robins and Mockingbirds. We also made an attempt at finding Red-breasted Nuthatch; however, we were unable to access the road where the chances were best and so came up empty. A bird on the ground got us a bit excited when we thought we had a Short-eared Owl, but it turned out to be a Northern Harrier. With time winding down, we made a team decision to do a quick sea watch and it paid off when we were rewarded with our first White-winged Gull of the day found by Nate, it was an Iceland Gull. Feeling lucky we again tried for a Short-eared Owl with the remaining time we had left. Unfortunately time was not on our side and we ended up missing on SEO, but watched a beautiful sunset as time ran out.

It was 5:00 p.m. the competition was over. We had our moments of fatigue, but thank goodness for Dunkin Donuts and Corey's potato bread, peanut butter and honey, which gave us much needed bursts of energy. Amazingly, the team was held it together staying sharp and focused despite the long haul. A tremendous effort by all! We went to the compilation dinner happy to take a load off. The pizza provided by our hosts was a welcome sight for a bunch of hungry birders and went down without a fuss. Before the winners were announced there were some prize giveaways determined by lottery tickets given out as we entered the room. It was pretty cool when they called out a winning ticket number that was held by teammate Mike Powers. 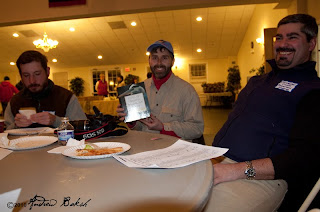 From L-R John, Mike displaying his prize and Chris all smiles.
Then the team winners were announced and we were pleasantly surprised when our team was announced as the winners of the Essex-County-Excels award, we each received a gift certificate to Bird Watcher's Supply and Gift or the nature shop at the Mass Audubon at Joppa Flats center. Sitting at the table pondering the day, I could not help but marvel what the Blogger Head Kingbirds had accomplished. A few days ago some of us were meeting for the first time, yet in that short span we came together focusing on applying our skills to make a run at the top spot. It spoke volumes about the professionalism and the commitment of everyone on the team. Next up, the day after...

Nice post, Andrew! I think I have my notebook out in that shot.

@John - Thanks John, I was not sure what it was you had in your hands, so thanks for clarifying that.