Shorebirding on LI - a new day high of 24 species of Shorebirds...

After finding a HUDSONIAN GODWIT on Saturday on the flats at Cupsogue Long Island New York, I began toying with the idea of a shorebird big day, the next day. What do I mean by that you ask? Well, this is the type of shorebirding where I would hit several known shorebird locations to maximize the number of shorebird species that I could see on a given day. Of course, this is all based on one's own honesty in not cheating. My previous high was 21 species back in September of 2010. However, given the lack of shorebirds in the area this year, I was merely hoping to break the 17 species high of shorebirds that I had accomplished 3 times already for the summer but could not get past that number.

While heading back to Queens that evening, I began to develop in my mind a strategy. I decided that the East Pond at Jamaica Bay would be my first stop. Even though the shorebird numbers there were dismal in recent days, there was always a chance to get a bird I might not get out at Cupsogue Long Island where I planned on returning. My target birds at Jamaica Bay were STILT SANDPIPER, either PHALAROPES or WHITE-RUMPED SANDPIPER. All three were going to be tough out east with STILT SANDPIPER the toughest of the three. After an hour of birding the East Pond, I left with 10 species of shorebirds (SPOTTED SANDPIPER, KILLDEER, BLACK-BELILED PLOVER, SEMIPALMATED PLOVER, LEAST SANDPIPER, SEMIPLMATED SANDPIPER, OYSTERCATCHER, SHORT-BILLED DOWITCHER, GREATER YELLOWLEGS and LESSER YELLOWLEGS) possibly 11 with a potential sleeping juvenile STILT SANDPIPER documented via photograph. I felt good about the ID but was content to wait to look at the photo once I downloaded it at home.

I departed Jamaica Bay in high spirits; feeling good because even if I did not break my season high of 17, I was having a good time shorebirding and I know I don't have to remind you my readers how much I LOVE SHOREBIRDS :) Taking a chance, I skipped Jones Beach and hauled it up to Dune Road LI. I figured that birders would be out chasing the HUGO and I was relieved to see a post from Angus Wilson who was birding with Ken Fuestel, they had the HUDSONIAN GODWIT on the Cupsoge Flats. It was still around, meaning I had a chance to add that bird to my list for the day. I called Ken and informed him to keep an eye out for an AMERICAN GOLDEN-PLOVER that Shai Mitra had picked out the day before but forget to mention that Patricia Lindsay had picked out a WHIMBREL that same afternoon, just as it landed in the flock of shorebirds that included the HUDSONIAN GODWIT. Minutes after the HUGO post, Micheal Yuan reported a WHIMBREL had dropped in on the flats. The potential number was looking good, all I had to do was see the birds. 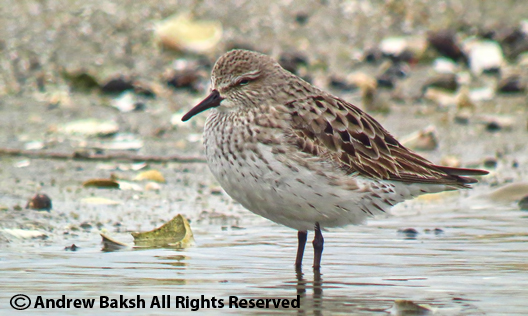 Instead of going straight to the Cupsogue flats, I decided to bird Pikes Beach in the hopes for a WHITE-RUMPED SANDPIPER. I had hoped that this was one I would have already bagged at Jamaica Bay but I could not find one. As a result, I felt Pikes was my next best shot since I did not see any on the Cupsogue Flats the day before. By then, Ken Fuestel had joined me at Pikes and while we were scoping one of the sandbars east of the platform, he asked me to take a look at a sleeping bird that he thought looked good for WRSA. I finally caught up with it and exclaimed in delight that it was indeed a WHITE-RUMPED SANDPIPER. I felt the sun on my face even though it was overcast with the threat of rain. I was very happy!! Ken left Pikes and I waded out to get close to the sandbar. I had spotted a banded PIPING PLOVER (another addition to my day list) and I wanted get a documentation photo (I was ready to abandon my quest just to get documentation of the PIPL, that is how serious I am about documenting banded birds). While obtaining a photo of the PIPING PLOVER, I found a banded RUDDY TURNSTONE (a first banded one for me). I also managed to get a photo of the WHITE-RUMPED SANDPIPER. With the addition of MARBLED GODWITS, WILLET (both Eastern and Western) and SANDERLINGS all at Pikes, I was up to 16 species of shorebirds. (note: this did not include the potential SITLT).

Things were looking good. If I added the HUDSONIAN GODWIT and WHIMBREL at Cupsogue, I was sure to get 18 and that would break my 17 shorebird species high for the year. But then I made an adjustment to my plan and decided to gamble. This decision was made thanks to my friends Tom Burke and Gail Benson who had traveled out east that day and had already seen the HUDSONIAN GODWIT. They had stopped in at Pikes when I was on my way out and indicated that they were on their way to visit a few of Long Island sod farms in search of AMERICAN GOLDEN-PLOVER. I did not hesitate; I decided that I was going with them to the sod farms for the AMERICAN GOLDEN-PLOVER, this was a chance to add to my list and maybe get PECTORAL SANDPIPER as well. At the sod farm along Osborne Avenue, Tom, Gail and I spotted several shorebirds. Included in the bunch I added BAIRD's (huge bonus) and PECTORAL SANDPIPER, number 17 and EIGHTEEN for the day. I had broken my season high of 17. Then I added number 19 when we added AMERICAN GOLDEN-PLOVER, enjoying scope views of about 24 of then on the sod farm on Sound Avenue. I left Tom and Gail shortly after and headed back to Cupsogue.

Having broken my season high, I was now thinking of a new goal. Could I break my all time shorebird high of 21 species from 2010? I counted off in my mind the birds I needed. There were four birds that I had the day before that I could potentially add to my 19. HUDSONIAN GODWIT, WHIMBREL, RED KNOT and DUNLIN. Of the four, I thought the WHIMBREL was the toughest since they do not tend to hang around. But then the HUGO could also have left. Resisting the urge to call Patricia Lindasy and Shai Mitra for an update since they were out on the flats, I hauled tail to Dune Road. After an agonizing drive on Dune Road behind someone who decided to drive 10 MPH in a 25 MPH zone, I finally pulled into the parking lot at Cupsogue. A quick change and I was ready for the flats. Only then, did I call Pat Lindsay and she had good news. Pat along with Doug Futuyma and Jim Cullen using his boat had the HUDSONIAN GODWIT on a sand bar known fondly as Pelican Bar. As soon as I could see the bar from the shore, I quickly scoped the location and added number 20 - yay for HUGO.

Number 21, I stumbled upon as I headed along the shore; the phone had just rang and I missed the call from Shia Mitra who was calling to let me know the location of the HUDSONIAN GODWIT.  I was focused on another call - a bird call, it was the sound of a WHIMBREL calling and as if guided by a higher power, the bird dropped right in front of me. Feeling like I had the blessing of the shorebird god (s), I added number 21 for the day and got some good close up shots. I even had time to snag a photo using my meopta adapter with my iPhone (thank you Mr. Cooper). 21 tied my all time shorebird count; I was confident that I was going to find a RED KNOT for 22 and shortly after I did, enjoying several juvenile RED KNOTS as they loafed on the flats at Cupsogue. I had a new personal shorebird day high count!!  Then I picked up number 23 as the winter plumaged DUNLIN I had seen the day before showed up, much to my delight. I was pleased as punch with 23. Confirmation of my STILT SANDPIPER made it 24, a fine number indeed and one that I am going to have a tough time beating unless I have one of those really special days at Jamaica Bay!

Great write-up and nice pics. Especially like that Whimbrel shot!

Great write-up and nice pics. Especially like that Whimbrel shot!

Awesome, I'm very envious! That seems like a hard number to beat in the future. Nice shots.