It was Friday, June 28th and I had confirmation that a Red-necked Stint (Calidris ruficollis) found on Thursday in MA continued. Red-necked Stints are strongly migratory breeding along the Arctic coast of  eastern Eurasia and spending the non-breedng season in South East Asia and Australasia as far south as Tasmania and New Zealand. They are rare vagrants to western Europe and often seen in western Alaska and occasionally elsewhere in the Americas.

I had contemplated twitching the bird on Friday but that idea never got off the ground.  I was happy the bird was still there but worried that I had blown an opportunity to see it since I did not make the run that very day.  A Red-necked Stint would be a life bird, but more importantly I wanted to get some field time with one as a personal goal of mine was to find one in NY (like my Ruff goal from last year).  I began to seriously think of twitching this bird on Saturday and thought of a few names who I could ask to go with me for the long haul.  Unfortunately most of the folks whose company I would enjoy on a long drive already had plans.  I decided to do a solo run and arranged to pick up my friend Jason Forbes in MA who knew the area and was up to trying for the bird on Saturday.

By 2:30 a.m. on Saturday morning I was on the road; with a few sips of coffee to keep me awake and NPR on the air, I was Massachusetts bound.  It was a long ride, but I did very well with one stop for gas.  By 5:47 a.m. I was pulling up to Jason's house.  He was ready despite me being ahead of schedule by half an hour.  We made one stop for much needed coffee and a breakfast snack and then it was onto Plum Island.  We pulled into Sandy Point about 1 hour later and walked down the beach to the area where the bird was last seen the day before.  Fast forward 7 hours later and no RNST.  Many birders had shown up and many were sympathetic once they found out I was the driver of the truck with NY license plates.  I was down but not out; I kept telling myself that the bird would show and if not, well there was always a chance of one in NY.  By 1:00 p.m. Jason and I decided it was time and so I dropped him off and began the long haul back to Queens NY.  The ride back to NY was harder especially after dipping on the bird.  Around 4:00 p.m. I put in a return a call to my friends Tom Burke and Gail Benson who had called earlier; due to my phone running out of juice, I was not able to return the call earlier but now was able to do so after recharging while driving.  Tom and Gail were surprised to learn that I twitched the Red-necked Stint in MA and were disappointed to learn that I did not see the bird, but I was upbeat telling Gail that I was fine and looking forward to finding my own in NY.  I later learned the next day that Shai Mitra and Tom in a conversation the very same day after learning about my dip indicated I would be just fine.  They both predicted that I would someday find my own in NY...with Tom going as far as saying maybe even the MA bird if it came to NY.

Back in NY, I was exhausted from the long drive, but still went out to dinner and the next day was up at 5:00 a.m. and on the road to Cupsogue LI for some birding.  I got there in good time, where I met Tom and Gail and did a brief seawatch with them in foggy conditions before heading out onto the flats.  The tide was low and there were a few birders out on the flats.  A few of them I knew by face but not by name and after exchanging the usual courtesy greetings, I continued on towards another birder whom I recognized as Dave Klauber.  Dave and I began discussing the recent good showing of Arctic Terns at Cupsogue; as if on cue, I had a brief glimpse of a 1st summer Arctic but the bird had moved by the time I took my eyes off it to tell other birders and I could not refind it.  Admittedly, I was not too focused on the Tern flock but was more interested in the small but increased number of peeps I had noticed running around on the flats.  This was more peeps than I had seen at Cupsogue over the past few days and I was encouraged at the possibility of finding something interesting.  Yes, Red-necked Stint was on my mind, but I was not thinking that I would find one, just that based on principle I had to pay attention, to look.  And so I told Dave that I was going to spend some time looking through the peeps and began scanning the flats for any groups of peeps that were feeding. 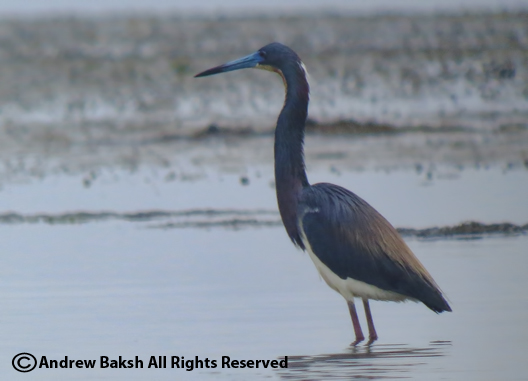 A Tricolored Heron, an excellent bird for the areas was near one of the channels and I took some time to get some digiscope shots.  By then another birder, John Gluth, had arrived and after giving him a brief update, he picked out a Gull-billed Tern that was way in the back towards the eastern edge of the flat.  I moved in and around the roosting Tern flock to get a better look and documentation photo of the Gull-billed Tern.  My movement allowed me to see behind the line of marsh grass that hid a section of mud flats.  While digiscoping the Gull-billed Tern, I noticed some peeps feeding on the flat and began to scan at first with my bins.  I would estimate there were about 16-17 shorebirds in that area and while scanning I noticed a smaller peep that had its back towards me near a clump of grass.  There was a Semipalmated Sandpiper next to it in side profile and it was that comparison that caught my eye.  Nothing strange about it I thought other than it looked darker on the back and smaller, but I reached for my scope to get a closer view.  As I brought the scope to bear on the bird it moved to the left towards a clump of grass and then behind it but not before I caught a glimpse of what appeared to be dark (rufous) color at the side of the face going towards the neck.  My heart skipped beat what the heck was that, I thought? I could not see the bird since it was now out of view behind the clump of grass but the adrenaline was already kicking in. What was that?  An odd looking SEMI or was it...a Red-necked Stint.  No !@#$%^&* way!  I silently cursed myself, thinking that I was having a case of raritis. Visions of Andy Balldeli and I with the blown Temminck's Stint call and Shia Mitra reminding us not to let raritis take over good judgement entered my head.

Think about it!  I had just chased a Red-necked Stint the day before in Massachusetts and dipped on it; what were the chances of seeing one in New York on the next day.  Zero!!!.  The power of suggestion, I was weary of it.  But, I had to be sure and so I began to move in towards the area.  Before moving, I glanced behind and to my left and noticed that John Gluth who had been joined by Seth Asubel and Mary Normiandy had moved up making their way towards me.  I thought about mentioning what I thought I saw then decided not to since I would have to walk back towards them and I did not want to lose track of where the bird went.  Plus, earlier, on the deck during the sea watch I had spoken briefly about dipping on the RNST in MA but told Seth and others I was confident that the shorebird gods were going to do right by me.  So, here I was suddenly I was going to tell them I thought I had seen a possible Red-necked Stint but can't find it.  That was sure going to get me some interesting looks, maybe smiles and possibly a retort like, "you are seeing things now".  I moved in closer circling to get an angle and then some, though not all of the peeps put up.  I had my scope in my hand and so was not able to immediately get on the flock, but then it split into two flocks and I threw up my camera and did some Hail Mary shooting.  I did not think my bird was in either of the flocks (later on after downloading photos, I found the Red-necked Stint in one of my flight shots) and had moved up a few feet to see if any remaining peeps were still on the ground when John Gluth called out.  There is a bird with Rufous here, probably a Stint - a Red-necked Stint. The feeling that came over me, is hard to describe.  I moved a few feet closer to John, Seth and Mary and tried to find the bird and the flock put up again.  But landed not too far from us and we all got quick looks before they put up again.  There was no mistaking the bird, then we began alerting other birders on the flats. 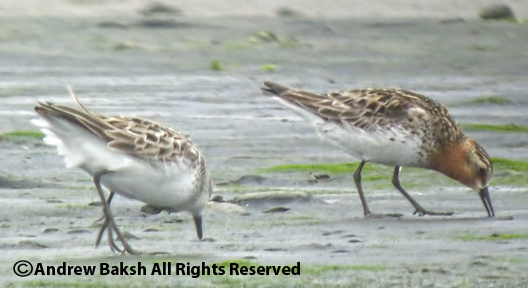 The bird moved around for a few more times, settled in and then we began studying the bird a bit more.  A careful examination of the bird removed any doubts about it being Red-necked Stint, we then began contemplating whether it was the bird from Massachusetts.  By then Tom Burke and Gail Benson were hurrying over towards us.  I called my friend Patricia Lindsay, got her voice mail and later learned that she and Shai were up north in Wurtsboro.  They later made it back to see the bird.  I was "chuffed as nuts", so happy that I forgot that I was running on a mere 3-4 hours of sleep in two days.  I forgot how I had dipped on the MA Red-necked Stint the day before; it did not matter, I had stuck GOLD and found my own Red-necked Stint with John Gluth and shared it with many of my birding friends who I admire and respect.  Despite all of that I could not help wishing for the presence of many others who have always been kind to me in the field.  Folks like Shai., Pat, Joan and Andria - wish you were there to share that moment guysl! So there you have it my dear readers.  A really unbelievable script, but like I always say, positive energy and luck is a great combination! 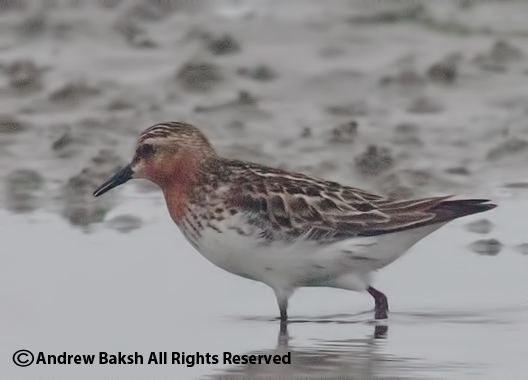 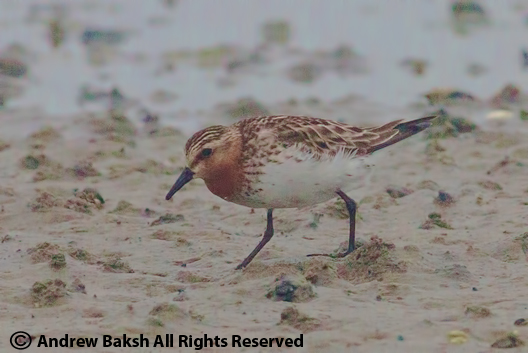 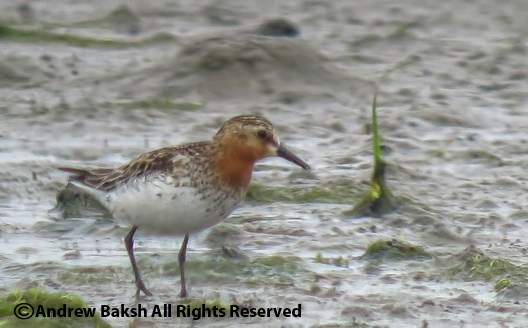 Posted by BIRDINGDUDE at 5:09 PM