5 Swallow Day + a Tufted Duck in April = Excellent Day in the Field...

A 5 Swallow day in April. Say what? I kid you not! Little did I know when I pulled into the parking lot at Hempstead Lake State Park LI, that I was in for quite a treat. Well...I am usually happy with any birds that I see, but to have a 5 Swallow day in April, is ...pretty cool.  Andria and I had chatted about possible migrants at Hempstead and I was hoping that the two lingering Blue-winged Teals would still be around since they would be lifers for Andria. We quickly picked up the BWTE and had moved on to the loop when we were joined by my friend Patricia Lindsay.

We three then birded the Hempstead loop picking up birds here and there. An American Woodcock, flushed which we all got looks at and then we began to work the Swallows on the lake. It was about 8:45 a.m. and it had not quite warmed up as yet, but there were Swallows out. Quickly noticeable were the Tree Swallows and a Barn Swallow soon followed. Then, as I was working the flock over, a small Swallow zipped past my frame of view. I hurriedly caught up with it and was quite surprised to find myself looking at a Bank Swallow. In my mind I quickly ran through the field marks, such as white underneath and brown on top, dark band across chest, extending down middle of chest before I could call out the bird, I lost it. I wanted another look and to get the others on it; but then Pat spoke up indicating that she thought she had seen a Bank Swallow. I grinned, validation baby! Yes, I replied, I had seen it as well.

We then began looking through the flock; it was not long before we picked it up again and worked through the ID. Indeed a Bank Swallow in April. We eventually left the lake, which was a mistake as I picked up a message minutes later that another birder, Derek Rogers who birded the lake after us reported a Cliff Swallow. We hurried back over and after a few minutes picked up the Cliff Swallow. Then we added Swallow number five, when we picked up Northern-rough Winged Swallow.

Pat split off and Andria and I continued to work the Swallows and I ended up managing a few photographs of the Cliff Swallow. From Hempstead, Andria and I decided to try for the Tufted Duck at Heckscher Pond in Huntington LI. It would be a rare opportunity if this bird cooperated and be a much better experience unlike the cold day in January when I got my year TUDU. As luck would have it, we got the bird and excellent looks. I was amused at how lucky Andria was at seeing this bird. I recall, Tom Burke, Gail Benson and I spent hours looking for this species in the cold and here Andria was looking at a Tufted Duck with decent weather and having close up views. This was a successful chase and a nice bird to get to add to our spectacular 5 Swallow Day already in the books. 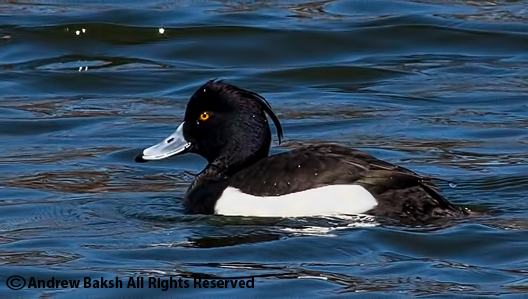