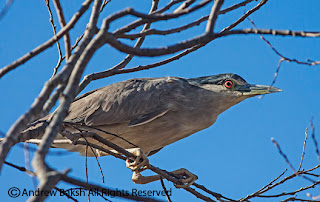 An enthusiastic group gathered at the usual meeting location (the nature center) and then it was off on our Saturday morning Van Cortlandt Park walk in the Bronx. After scanning the Parade Grounds, we headed into Vault Hill looking for early migrants. It turned out to be rather uneventful save for two Golden-crowned Kinglets. From Vault Hill we then did the loop around the lake and picked up a couple of good birds including Black-crowned Night Heron, Green-winged Teals and a lone female Ring-necked Duck on the lake. The latter an unusual one for Van Cortlandt Park. We ended up with 37 species, which was not a bad number for this time of the year. Hopefully our next walk will turn up a few more migrants.
Tags:

Posted by BIRDINGDUDE at 5:45 PM