On June 30th, I had suggested to Heydi Lopes that I wanted to return to Jamaica Bay on the East Pond (July 1st), to see if there was any significant change in the arrivals of shorebirds. The day before I had visited the East Pond and had noted a turnover of shorebirds indicating birds were slowly arriving.  I had been scouting the East Pond since the end of May and I was excited. National Park Service, specifically the Jamaica Bay unit had kept their promise and had begun to lower the water earlier than normal dates and I had tested walking onto the pond. It was looking really, really good for the early date.  Heydi, I suppose  trusting my scouting came out with me on Sunday July 1st and she did not regret her decision as we found a 1st year molting male Ruff (Philomachus pugnax), in an unusual plumage - an all white head. But I am getting ahead of myself here. Let me back up to how the Ruff happened.

We had made our way into the north end of the East Pond walking on the west side of the pond all the way to what is known as "Dead Man's Cove" (or Mud Cove) a cove just after Sanderling Point, which is almost opposite the North Island. We had a good number of shorebirds on the other side of Dead Man's Cove, so we began to sift through the flocks and I began to count numbers for my shorebird survey. I had made one pass in an area and had circled back to give it another going over when my eye caught a bird with its back to me. It was preening and I could only see its back, but its legs looked long and the color, Gray/Greenish was what made me took a closer look. 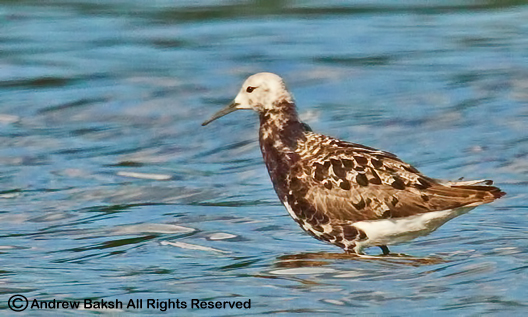 I zoomed in on the bird with my scope and it briefly raised its head. It looked like it was white! I was thinking maybe I made a mistake (lack of coffee perhaps...or bad light?), so I worked the bird over and again I caught a bit of white, when the bird again very briefly raised its head. It looked like a vulture like shorebird. My pulse quickened and like I did with the Sandwich Tern at Mecox LI, I began to conjure up images in my head. The bird shifted a bit and I could now see part of the left side, "black feathers".  Could it be a Ruff?   No way, I was thinking.  I had missed out on chasing the recent Ruff at Montezuma in Seneca NY and had mused that I may find my own in my home county.  Did it happen?  The bird then stretched its neck and I got a good look at its small white head short bill and the feathers fluffed out from the side of the neck. I whispered, to myself in disbelief its a %#$%^#^ "Ruff". 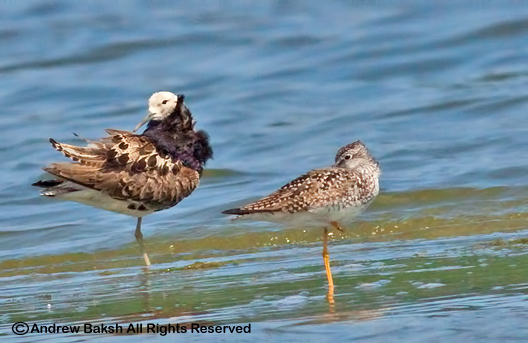 Casually as I could (I still haven't gotten to the foaming at the mouth level like a certain shorebird aficianado birder that I know) without taking my eye of the bird I said to Heydi, "I think we have a "Ruff". Heydi responded in disbelief "what...no way"!! Then, I got her to look in my scope; it seemed an agonizingly long time during which I was at the point of telling her that I needed to get back on my scope to get a photo.  Finally, she nodded that she had seen the bird.  I got back on my scope to get another look and began to take notes; next I fired off some digiscope shots. Heydi meanwhile had found the bird in her scope and was reviewing it as well. I asked for her opinion on the call and Heydi agreed; I then asked her to stay on the bird while I grabbed my phone. Time to make the phone calls and to put out a post. Tom Burke and Shai Mitra were the first two people I called.  Shai was at home and immediately went into response mode (think Mario Andretti on the Southern State Parkway).  Tom was at Sterling Forest and I told him I was going to baby sit the bird until he arrived (that is what friends do because Tom would do it for me).  I then whipped up a post, which successfully made it out (I take back my swipe at smartphones...see the Sandwich Tern post) and made some additional phone calls.  Satisfied that I had made calls to cover enough ground especially with folks without smartphones, I went back to studying and documenting the bird.

The bird relocated and I got a bit nervous when we could not see it, but Heydi picked it up again as it wandered out from around one of the many smaller coves on the west side past "Dead Man's Cove".  The bird kept on wandering in and out of sight, so Heydi and I decided we had to make it around the cove to keep a better eye on the bird.  This was going to be tricky because the cove was still very muddy and one false move could put us in a sticky situation.  Having navigated the cove many times, I took the lead and bushwhacked a path around the cove with Heydi right there with me bushwhacking along as well.  We finally made it around and we cautiously moved into position where we could monitor the bird allowing it ample room so as not to spook it. 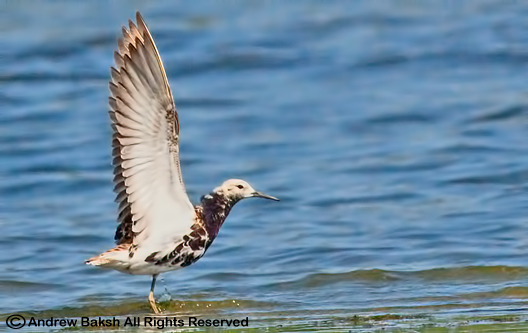 The first to arrive were Shai Mitra and Patricia Lindsay.  They quickly got on the bird and enjoyed the good looks even though the lighting was not the best.  Next to arrive was the affable and shorebird foaming at the mouth aficionado Bobby Kurtz, who unfortunately in his haste to get to our location, took a dive into the cove (thank you for being the 1st of the year sacrifices - the East Pond Gods demands it).  Bobby turned out to be okay and with his muddy self joined us in our observation of the bird.  Tom Burke, Gail Benson and Andy Guthrie arrived shortly after and they too got on the bird.  Additional birders soon also arrived and they joined the group of observers.  Finally, after Doug Futumya arrived and we observed the bird with him, Heydi and I left the pond, happy but wanting to take a break from the sun.  We returned later in the afternoon, where surprisingly we had the pond and the bird to ourselves and we were able to do additional studies and documenting.  According to the NYSARC (New York State Avian Records Committee) archives, it was six years since a Ruff was seen at Jamaica Bay. How cool to be involved in finding one! I was extremely happy that we had found such a neat shorebird, a state bird at that, on the East Pond, at a place I love dearly...I could not have scripted it any better!!! 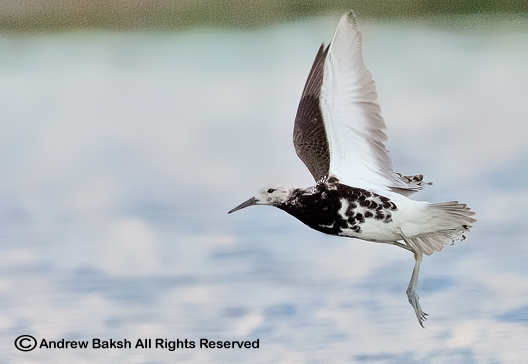 You and your friends are officially nuts ;-) Had never heard of a Ruff.. Very cool bird & sighting..