Heydi Lopes and I were in Delaware on May 27th, chasing a breeding plumage Sabine’s Gull (Xema sabini) that was hanging around the Dupont Nature Center near Misipillion Harbor, when we picked up a report that my friend Shai Mitra, the ternmiester himself had found and photographed four Arctic Terns(Sterna paradisaea) at Cupsogue LI.  I was not surprised, an Arctic Tern had been found the previous day at Sandy Hook NJ by Scott Barnes and I had a gut feeling that they would show up on LI.  After speaking with Shai and Tom Burke; Heydi and I discussed whether to try for Mississippi Kites (Ictinia mississippiensis) that had shown up at Sterling Forest or the Terns. We settled for the Terns since it was a life bird for Heydi.

The morning began really slowly at Cupsogue LI, with heavy fog engulfing the ocean thus, making sea watching impossible. Out on the flats it was worse although some birders actually decided on wandering out on the flats. After giving up on the sea watch, Tom Burke, Gail Benson, Heydi and I began to scan the flats from the boardwalk and Tom very quickly picked up 2 fly by Whimbrels (Numenius phaeopus). Seeing that the fog had lifted slightly, I decided that it was time to explore the flats, so Heydi and I headed out. Before we could get onto the flats, I got a phone call from Tom indicating that he had received word that Michael McBrien who had ventured out onto the flats had found an adult Arctic Tern. This was excellent news!! We just had to get out there, so Heydi and I hurried, managing the tricky channels and made it onto the flats where we connected with the Arctic Tern (Thank you Michael!).


It was a life and state bird for Heydi who was happy despite being a little distracted at receiving reports of Brooklyn birds showing up that she needed for the year :) I was very pleased that we had gotten our target bird for the day and enjoyed studying the bird as it moved around with the Common Terns. We were then joined first by Tom Burke and Gail Benson and then later by Shai Mitra and Patricia Lindsay. As if on cue, Shai upon arriving picked out a second adult Arctic Tern, which departed all too quickly for the ocean. However, the first Arctic Tern stuck around and we all got excellent looks and some of us managed photos. In addition to the Arctic Tern, we had really close up looks at Roseate Terns, a single Forster's Tern and a variety of shorebirds. 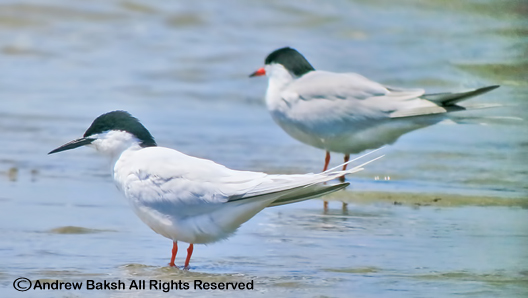 Shai and I did the ritual of staying with the rising tide until the last possible moment (Heydi being a good sport stayed with us) hoping to add to our already good list of birds, but we were unable to top our already excellent sightings. We eventually made it back to the boardwalk where we joined the others and imbibed in a few celebratory drinks. Some of us stayed around for an afternoon sea watch, which was not too productive save for a couple of Sooty Shearwaters.  We all soon parted ways trying to beat the holiday weekend traffic; Heydi and I continued birding out on the Island of Long, adding several good birds to an already impressive day list and wrapping up a good weekend of birding!  Here are some additional photos of the adult Arctic Tern we enjoyed at Cupsogue LI. 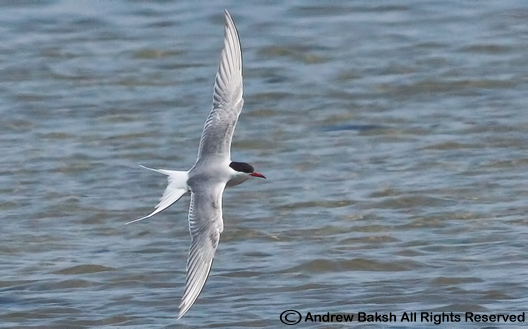