Today's guest post was written by Michael McBrien, the founder of the Curlew Sandpiper on June 14th, at Cupsogue Long Island.  Michael, is currently serving as the vice president of the New York State Young Birders Club and has been involved with the group since 2009.  In September, he will begin his junior year of high school.  Michael has been interested in nature most of his life and shared how his mom remembers him getting up very early each morning when he was a toddler to watch a show called "Mother Nature" on Animal Planet which featured birds such as Common Loons and American Bitterns.

Michael became interested in birds in the first grade when he did a science project on Ospreys.  But credits a family birding trip to Hawk Mountain in Pennsylvania in 2003 as the moment when he became hooked on birding and has been avidly birding since. Michael enjoys all aspects of birding from watching seaducks on the coast during the winter, to studying terns and shorebirds in the summer, to observing songbird flocks throughout migration.  However,  he particularly enjoys birding during windblown rainstorms; something we both have in common!

I first met Michael during a Nassau County Christmas Bird Count and it was obvious that he was a very focused young man on his birding.  Besides his obvious skills as a birder, I am very impressed with Michael's humility through it all.  He has always demonstrated to be a polite, humble (an important character trait) and grounded young man, which is a great credit to his upbringing!!  Here is his write-up on how the finding of the Curlew Sandpiper unfolded - enjoy!

On, Thursday, June 14th, I (Michael McBrien), arrived at Cupsogue Long Island a bit after low tide.  As I was walking out onto the flats, it seemed like it was going to be a fairly quiet day. There was a stiff northeast breeze and very few terns were loafing about the flats.  Although the number of Common Terns on the flats was low when I arrived, I decided to make the most of my visit and spent the remainder of my time out on the flats studying the lingering migrant shorebirds.  A good amount of Red Knots were present along with the usual Plovers, Dowitchers, and Peeps.

Eventually, as the tide continued to rise, it came time for me to begin my trek back across the mudflats.  I packed away my camera and did a final scan of the shorebirds and terns, then started heading back. However, just before I was about to cross the first channel, I came across a small flock of shorebirds feeding in a mussel bed.  Raising my binoculars, I quickly saw the flock included a couple more Red Knots (Calidris canutus), a Dunlin (Calidris alpina) and a few Semipalmated Sandpipers (Calidris pusilla ).  But then, I laid my eyes upon a different bird. From the naked eye, I had assumed it was a breeding plumaged knot, but a closer look revealed it to be something very different - a shorebird with extensive, brick red underparts, a long curved bill, and fairly long black legs.  At first, I couldn't believe my eyes.  But there I stood in the middle of a rising pool of water, in pure astonishment, with a beautiful adult male Curlew Sandpiper (Calidris ferruginea) standing before me.

By now, I was hitting myself for putting my camera away earlier, but realizing the rarity of this bird, I carefully slid it out of my backpack, trying not to make any sudden movements.  After I had taken a couple of shots, I called my mom and then a few other birders to alert them about this bird.  After getting my mom on the bird, I stayed out a while longer studying it as the tide slowly washed away its feeding area.  It eventually flew off to join a larger flock of Red Knots until they together flew off into the grasses surrounding one of the marsh islands.

And now as I made my way back across the flooded marsh, I could only think of how privileged I was to have found this great bird, especially on a day that seemed pretty quiet when it began.  This all serves to show that when you're out birding, you never know what you may see.  To quote someone I know, "you have to leave yourself open to the day."

Here are some photos of the Curlew Sandpiper: 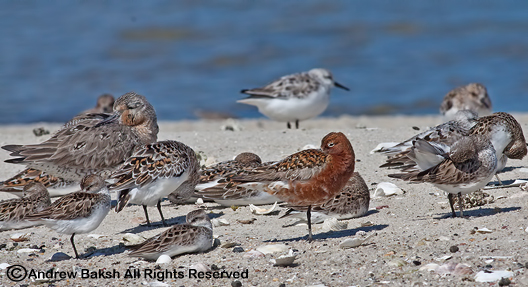 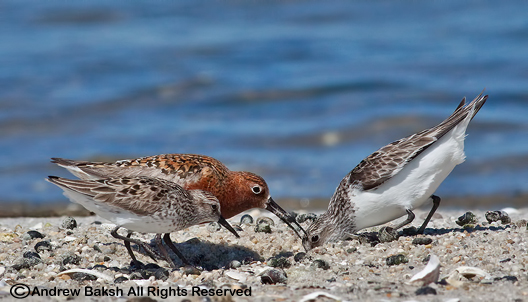 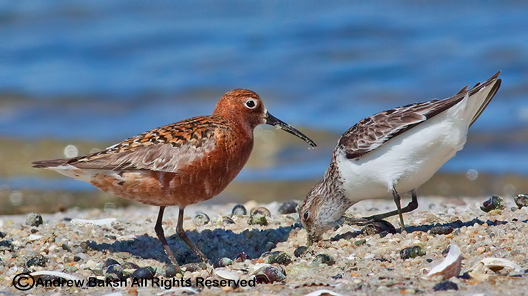 Posted by BIRDINGDUDE at 8:44 PM