When word of an apparent Ruff (Philomachus pugnax), was still being reported in Connecticut, it did not take much convincing to get my juices going for a chase especially when it would be a lifer shorebird.  That is exactly what we did when Heydi Lopes and I successfully chased down the target bird on May 18th, in Connecticut at Hammonasset Beach State Park CT.  It was touch and go on the way as we were not picking up any reports of the bird being seen that day while on route, but we erased any negative thoughts and hoped for the best.

When we arrived, the lack of birders in the area gave us a sinking feeling that maybe the bird was not around, but we focused on searching the area.  I chased down a couple who I spotted with binoculars only to learn that they were not even aware that a rarity was in the area.  Not, what we wanted to hear, but I urged them to join us to look for the bird!  We continued exploring the area and were looking at a strange looking Tri-colored Heron (more on this later), when I noticed another couple with a spotting scope looking at another pond (later determined to be Boulder Pond).  They had a field guide out and I began to get excited.  Field Guide could only mean one thing; they had a bird that they needed to verify the ID.


Ruff/Reeve...perhaps was my thought.  I shouted out to Heydi, that I was heading over to the couple and hurried over to where they were standing.  Asking if they had the Reeve/Ruff, I was greeted with, "ah…not sure…we think so" followed by an offer to look in their scope.  I took one look and a huge grin engulfed my face.  Ruffreevelieved I was!!!  I had a lifer.  Turing around to Heydi and the other couple, I yelled out that it was here.  We quickly setup our own scopes and got great looks at the Ruff/Reeve.  Heydi and I hung out all afternoon at the location birding the area, helping others to get on the bird and totally enjoying our lifer Ruff/Reeve.  Shout out to Toby and Dottie (hopefully I spelled their names correctly), thank you for your kind words and for sharing a good bird with us. 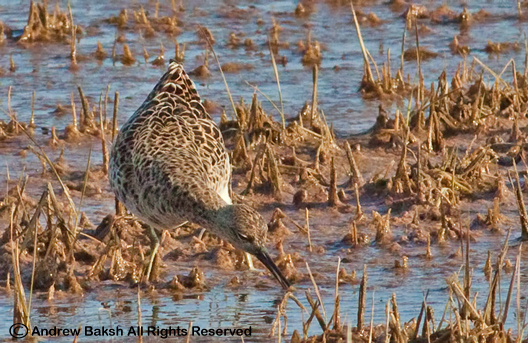 Readers might be wondering why when describing this bird, I choose to use Ruff/Reeve.  Even though the size seems to point to a female (Reeve), I have no experience with this species and so I cannot confidently say this is a male or female.  Well, how about the plumage of the males you may wonder...isn't it different than females?  Yes and no.  At this time of the year "typical" males known as Ruffs would be easy to identify with their extensive neck plumes which goes on full display when courting or lekking.  But wait, I just used "typical", so what does that mean? 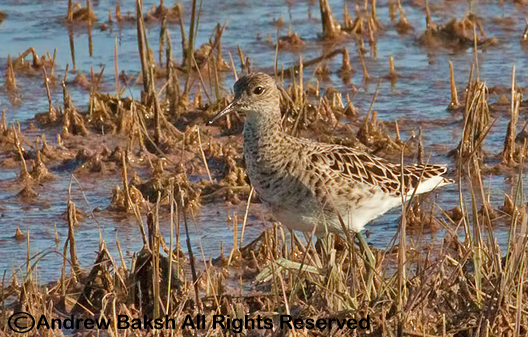 Ruffs, the males, have a lekmating system with three males types, the colourful independent males, the white satellite males and the faeders, who so closely resemble females that they are indistinguishable in the field (Hogan-Warburg 1966; van Rhijn 1991; Jukema & Piersma 2006).  This bird could very well fall into the faeder category; hence, my position.   If you want to learn more about this fascinating species, then take a look at this  link and also google for more information.  It is pretty cool stuff! 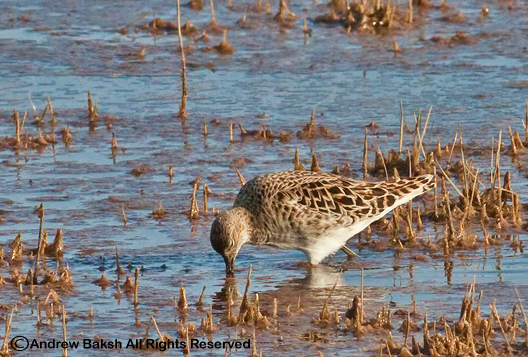 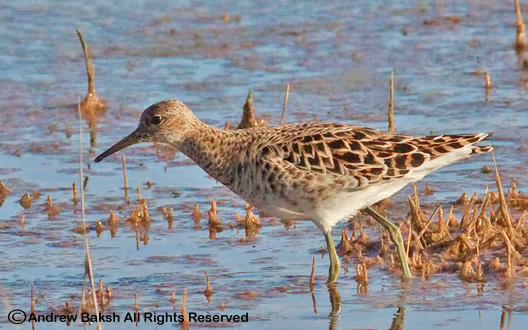 Great bird and wonderful sighting. Your photos are gorgeous. Congrats on your lifer.

Thanks Eileen. I totally enjoyed that bird!!

Congrats Dude! I thought about going after this bird and the curlew...but didn't . happy Birding mr Dude :)

@Dawn and @Cindy Thanks. That was a very enjoyable bird for me.