Following the exciting session of studying a first summer Arctic Tern at Cupsogue LI on Saturday July 9th. I returned to the area on Monday to do some tern studies on my own. The tide was high when I arrived but dropping by the time I navigated and waded out onto the flats. It was nice and quiet on the flats with nary a birder or clamer in sight - I was pretty happy about that, as it meant that I would have some quiet time. I worked over the Terns methodically, taking notes and snapping as many photos as I could, especially of juvenile and 1st summer birds. After about 2 hours, I took a break from Terns and walked the flats, looking at shorebirds. Returning to the Terns I picked out a couple of Black Terns and an adult Roseate Tern, new arrivals that arrived with a turnover of the flock. While reviewing the Black Terns, I noticed some additional Terns flying in and noticed a bird that did not fit the birds I had already seen for the morning. 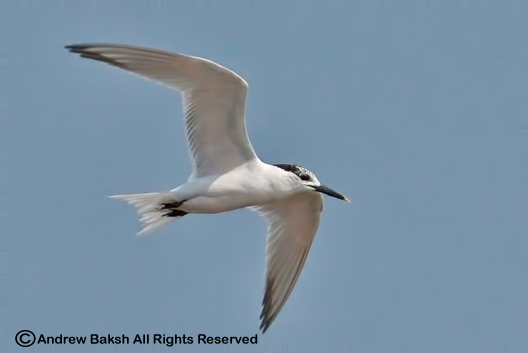 The bird came in close and my first thought was, Sandwich Tern. I fired off some shots in flight and tracked the bird to where it landed. Putting my scope on the bird, I did a quick review to ensure that I had the ID correct, which I did and then got off a few digiscoping shots before the bird picked up and headed towards the ocean. I birded the area for another few more hours looking for the Sandwich Tern, but never relocated it. Other birders who arrived later looked unsuccessfully for it, but it was never relocated that day or thereafter. This was only my second Sandwich Tern in NY with my first in 2009 also at Cupsogue Long Island. I was very pleased at finding my own specialty tern, and credit it to luck, as well as the lessons I have learned, while birding on the flats with friends and some of the best birders in the state, Shai Mitra, Pat Lindsay, Tom Burke and Gail Benson. 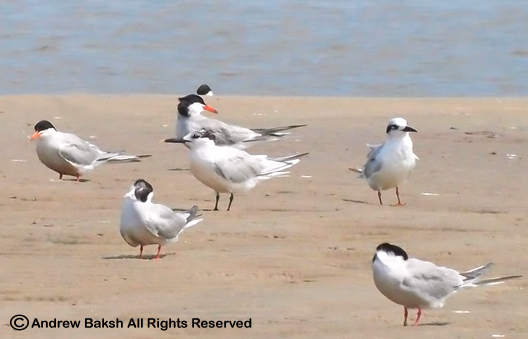 Posted by BIRDINGDUDE at 1:29 PM

Did you put mustard on it and have it for lunch :-)? Congrats..and now I know what one looks like..