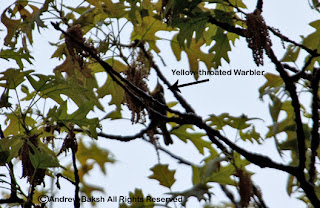 Last Sunday, I went to Forest Park in Queens NY, where I met up with naturalists Rich Kelly and Al Lindberg.  We had planned, on doing a bit of birding before meeting up with Mike Feder, another naturalist who was scheduled to do a botany walk that morning.  Rich, Al and I looked and listened for birds as well as talked a bit about botany.  After about a half an hour of birding/botany, we met up with Mike and the botany chatter really then picked up; Mike used us as his test subjects, in gearing up for his walk later on in the morning.  We were ambling along on Forest Park Drive, when we ran into another birder and friend, Doug Futuyma who joined us and together we continued working our way around Forest Park, birding and checking out plants.  It was relatively quiet, until we hit an area called the “Little Gully”, then we began picking up pockets of activity.  We had to work very hard for our birds as they were high up, but those that sang like Chestnut-sided and Canada Warblers, allowed us to track their presence high up in the canopy and we slowly began to build our day list of warblers.

Over by the railroad tracks, the songs of Indigo Buntings and Rose-breasted Grosbeaks alerted us to their presence.  Another birder, Peter Reisfeld, joined us making a group of 6; we continued working our way on the northern segment of the bridal path loop located just east of the “Big Gully”.  We had stopped to work over some warblers that were high up in the canopy, when I got a fleeting look at a bird whose sides showed white with streaks.  My mind stumbled over possible candidates as I tried to track its movements.  While the lighting was poor, I ruled out Black-and-white Warbler Mniotilta varia, but was not entirely sure as the look was very brief.  What the heck was it then?  The bird was way back in the canopy and stayed out of sight for a bit, but I did not give up trying to track the obscured movements behind leaves.  Suddenly, the bird shifted and showed another angle, as it poked its head out from behind some leaves.  Guys, I think I have a got a “Yellow-throated Warbler” Dendroica dominica, I managed to blurt out.   Then I lost the bird in the canopy.
Everyone was now trying to get on the area I was looking, and tempted as I was to put my bins down and guide others to the location I did not, remembering the hard lesson last year with the missed Connecticut Warbler.  I talked everyone through to the area where I was looking when the bird popped into view, I yelled out for everyone to, "get on the bird"!!!  No one was saying anything; I needed someone else to confirm what I had spotted.  Suddenly, Doug replied, “I’ve got it”.  Did you confirm the ID was my response?  My question was greeted with silence then Doug, answered, yes, “It is a Yellow-throated Warbler”.  Slowly everyone worked over the area until they all got on the bird, which then became a bit more cooperative staying in view a little longer, as if to reward us for the neck breaking views.

I was pretty pumped up.  This was a bird I had dipped on last year and finally this year I had gotten my first of the state in Staten Island and now my second, but more importantly, this one was in Queens, my home county.  Everyone was ecstatic!  Birder, Tom Burke had found a Yellow-throated Warbler about a week ago in Forest Park and someone (not sure who it was) had seen one the day before during the Queens Bird Club Big Day event in Forest Park. We had not given it any thought as to finding one and here we were enjoying our looks - talk about luck.  Our group continued birding, but soon parted ways.  I was feeling lucky and so decided to continue birding with Peter and Doug.  We picked up additional birds including a non singing Worm-eating Warbler.  Peter soon left and Doug and I headed to Jamaica Bay.  At Jamaica Bay, we did not find the Kentucky Warbler that some of us had on Thursday and so we decided to head out to Jones Beach LI.  It was at Jones Beach, that Doug and I had our second rare bird of the day - more on that in another post.
Tags:

Posted by BIRDINGDUDE at 4:19 PM

How very exciting Andrew..and coming from you..the photo made me laugh. Congrats!

Thanks Cindy - that photo was heavily cropped and lightened a bit. The back light high up in the canopy was terrible. I was not even sure I was going to get a documentation shot, it was so bad.

It was an exciting moment and more so because it was share with other birders.

Hi I usually go to forest park constantly. If you really want to see cardinals ,blue jays ,orioles just to name a few. Parklane south on freedom drive heading towards Myrtle there's a opening towards right. Enjoy bird watching. Because I have