After the Earth Day project on Saturday, April 25th I did some birding at Jamaica Bay Wildlife Refuge with friends, Joan Quinlan, Gerta Fritz and Pat Lindsay. During our hike around the West Pond Trail, we talked about keeping an eye out for a possible White-faced Ibis that could show up anytime. We did not find any that day. 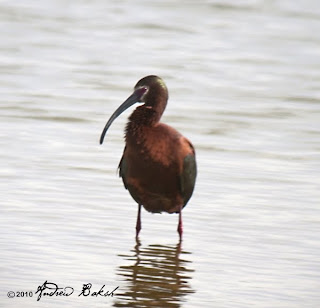 However, on Monday April 26th, I got a phone call from birder Shane Blodgett, who relayed that he had found a White-faced Ibis (Plegadis chihi)at the Refuge. Unfortunately, I could not get out right then to get the bird and so I waited until yesterday, Wednesday April 28th. It took some amount of searching, but I finally found the bird way out in the Marsh. I patiently observed the bird for well over an hour and was rewarded with one decent photograph as the White-faced Ibis came in on the West Pond mudflats after it was flushed out of the marsh by a Northern Harrier. 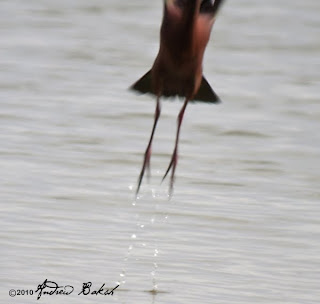 The flock of Glossy Ibis' that was with the White-faced Ibis were very skittish and I only got off 2 digiscoping shots before they took flight. I felt very lucky to have gotten the looks that I did of this bird and silently thanked the Northern Harrier for the flush. According to NYSARC records, this would make the 8th record in Queens if it is accepted.

Posted by BIRDINGDUDE at 8:11 PM

Loving the lift0off picture, even if it's not as good a look at the bird as the first one. Congratulations on getting this one for your list.