NYSOA meeting and the Chase for the White-Ibis - DAY II Part 2... 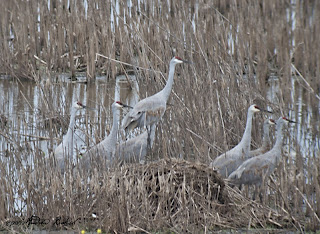 If you have enjoyed the trip so far read on, it gets even more exciting. On day 1, Shai had brought up the reported White Ibis in Tonawanda NY and we all discussed the feasibility of chasing. As part of our intelligence gathering, we used text messaging, Blackberry searches, and phone calls in an effort to keep tabs on the news regarding the bird. The plan was, if this bird was consistent we would seriously consider making a run for it. It so happened at the NYSOA meeting, we met a few birders who informed us that they had seen the bird earlier in the day. That was the news to seal the deal and so we moved from intelligence gathering mode to operation planning. Shai recruited Dominic Sherony, to draw a map on the whereabouts of the bird. Once we had the logistics squared away, we decided that, if Shai finished his meeting within a decent time frame, we were going to make a run for the bird. After Pat and I went and got the Sandhill Cranes, we headed right back to the visitor’s center to see if Shai’s meeting was over. Our timing was immpecable, as we pulled into the parking lot Shai was exiting the building. The chase was on!!!

Our ride, took us about an hour and a half from the Montezuma Audubon Center and brought us to within 12 miles from Buffalo. While traveling, the weather began changing for the worse with rain and light condtions making visibility poor. We pressed on maintaining a positive attitude; hoping, that the rain would quell once we got to our location. Once we arrived at Tonawonda, we all donned wellies and rain gear and prepared to head out onto the dam. Our objective was to head to the location where the White-Ibis was reported to be roosting in the evening. Our hand drawn map indicated that the walk was about a mile. Since the rain was still fallng, we only took one scope. This was to minimize the risk of optics getting damaged should it really start to pour and we needed to sacrifice rain gear to keep that scope protected. I even walked with a smaller lens that I was able to cover with my rain gear instead of my usual lens. 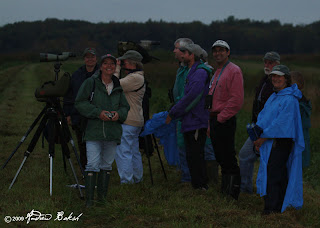 Before we headed out, another birder who was on the opposite side of the dam saw us and joined the walk to the roosting location where the White-Ibis was last reported. On our way in and during our wait we picked up a couple more species for our trip list in a Sora (heard) and Rusty Blackbirds. After about a mile in, the rain suddenly subsided and the light even got better - truly a sign that the gods were smiling upon us. About an hour and a half into the wait, we observed a number of Great Egrets flying in, heading for their roost sites; they landed in trees right across from our location. This was confirmation that we appeared to be at the target location. The Egrets, first came in 3's, 4’s and 5’s, but then began coming in bunches sometimes as many as 15 in one wave. After about the 3rd big wave, Pat suddenly said out aloud, "here comes our bird" – all eyes turned to key in towards Pat’s target. Yep, it was our bird a juvenile White-Ibis, a beauty at that. The bird flew in circling and heading towards a roosting spot. Once it landed Shai got his scope on the bird and we got decent looks even though it required hard work to maintain focus in between all the trees. We were estatic! – there were high fives and hugs all round. How often does a good plan unfold like this one did? I say, a bit of luck and positive energy goes a long way. After getting good looks and helping other arriving birders to get on the bird it was time to leave. It had also started to drizzle and the light was almost gone. 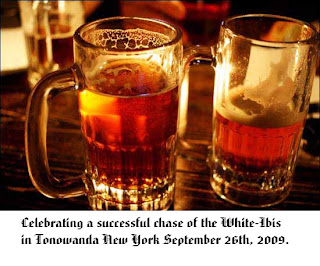 We just made it back to the car when it started to rain again. Did I say that the Gods gave us a weather respite just so we could get that bird? Despite the downpour and one headlight not functioning properly, we did well in the capable hands of Shai our driver on the return leg. Our energy was up and we swapped stories about memorable times in the field; the best story, had to be Pat’s legendary 7 runs – yes, this is no typo. 7 consecutive runs for a Whiskered Tern in Delaware landing the bird on the seventh try – talk about tenacity. With facinating stories like this, our ride went quickly. By 10:00 p.m. we were pulling into a bar/restaurant named Roadhouse where we imbibed in celebratory drinks and light food before retiring for the night. Night 2 went off without a hitch and again I did not have any cause to use deadly force.