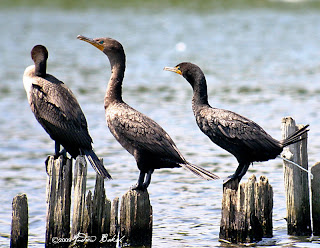 As I write this post, two people come to mind that at one point or another I thought of today. Kevin Karlson, whose presentation and discussion during the recent Shorebird Festival, I have been playing over and over in my head. Shai Mitra, who I have only birded with twice, but his relentless, studying of birds going through each one ever so patiently, has left a lasting impression on me. I have come to rely on his words of "Stay Focused", whenever I find myself wavering from the daunting task of scanning hundreds or thousands of birds for that one that stands out. 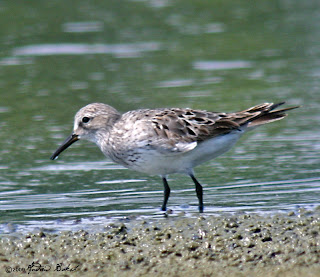 When I got to the Wildlife Refuge, I decided to start from the South because I was early. I felt that I could bird from the South to the North before my friend Karlo Mirth, who had said he would join me showed up. I also wanted to try and get photos of birds with the light behind me. A couple of hours later Karlo caught up with me just as I was nearing the East end side of the North End. We scoped out a number of birds on the North Island noting a number of White-rumped Sandpipers. For the day, we counted well over 20 White-rumped Sandpipers during our hike. On the other side of the pond a few well known birders were leaving and since they did not signal that there was anything of significance, Karlo was all for leaving. I decided that I would press on and bird the North West side; I had taken a few paces when I heard Karlo calling out that he would join me. Karlo would later thank me for encouraging him to stay the course. 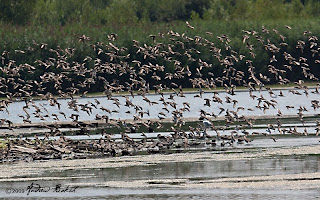 Karlo and I entered the west side on the North end and made way for a couple of photographers, Lloyd Spitalnik and another gentleman whose first name I caught as Michael. I suggested to Karlo that we hang back and allow the photographers to get ahead of us so that they could settle in and get their shots. While allowing the photographers to continue on, we settled in to scope out some birds that were hanging out at the end of the spit that we were on. It was during this time that a small flock of birds flew in and I was able to identify plovers in the flock; my attention was immediately drawn to a smaller Plover with no black armpits. Keeping an eye on the flock, I tracked where the birds landed and put my scope on this particular bird. After looking at this bird for a moment, I turned to Karlo as casual as I could (I was really trying to contain myself) and said, "I think we have an American Golden-Plover". Karlo quickly keyed in on the bird and after looking at the bird, replied, "good call, I agree, it is an American Golden-Plover bird". We quickly got a few other birders who were there to get looks at the bird and they were all appreciative of the find and for sharing. I’ll stop here and let the photos do the rest. Enjoy! 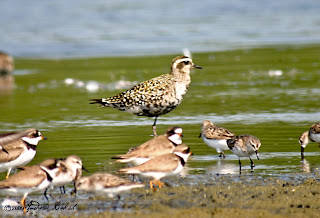 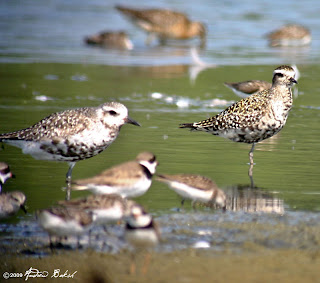 A comparison shot of the American Golden-Plover with a Black Bellied-Plover. 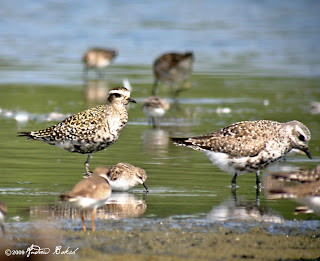 A comparison shot of the American Golden-Plover with a Black Bellied-Plover.
Tags:

Posted by BIRDINGDUDE at 2:22 AM

Another great post Andrew. Your shorebird identification skills are absolutely amazing. I have trouble with them even when they're in breeding plumage. I bow to the master!

@Pat - Hi Pat, thank you for stopping by and leaving a comment. Oh my, you give me way too much credit than I deserve. I am just a novice/newbie.

Great photos--just got back from Virginia Beach and can't say I did much identification of birds. Enjoyed just walking along the beach and watching them.

The Cormorants are my favorite. I have yet to see any around here, although I know they're lurking. Excellent post, Andrew :)

@Appalachian Lady - thanks for stopping by and leaving a message. I hope that by reading some of these posts, it may encourage you to want to ID some of the birds you see. Try it, you may like it. Be forewarned that once you get the fever there is no turning back :)

@LadyWoodpecker - Hi Kimberly, thank you for stopping by and leaving a comment. Don't you just love the eye color of the Cormorants? I wonder how many birders know the color of their eyes or even take the time to look.

What a great story!
Glad I can catch up on your blog now!
I have only seen the golden once and just briefly..
nice comparison shots!