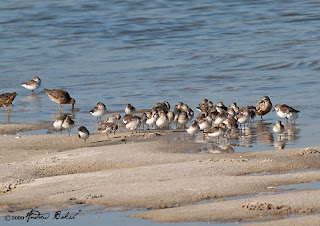 Another long day of birding out East in Suffolk County turned in an impressive number of shorebirds, with our last tally showing 20 different species. Corey Finger of 10000birds and I left Queens around 6:20 AM and arrived about an hour and a half later at our first stop, which was Saag Pond in Suffolk County. At that location, we met up with Andy, Shai and Pat, who by now you should all be familiar with from my previous posts on birding Suffolk County. 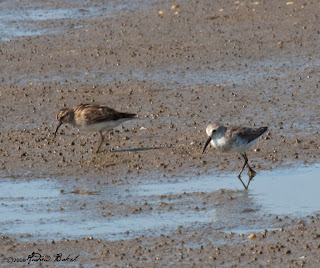 Andy in true altruistic nature took it upon himself to be our local guide and he took us around the pond where we were treated to looks at a number of shorebirds. It was at this location that I took some time to find and observe any Western Sandpipers that I could find from among the Least and Semipalmated Sandpipers. This was the best time of the day for me. I found and locked onto one Western Sandpiper spending a good half an hour following it with my bins and scope watching its behavior and comparing it to the Least and Semipalmated Sandpipers. 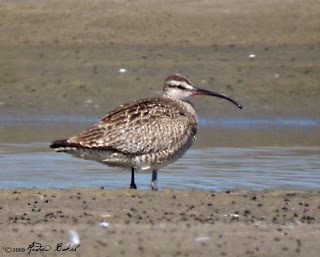 Other highlights at Saag Pond were a Whimbrel (this time we got photos) that Andy found, which provided us with great looks, 3 molting Black Terns, Forster Terns and my second Sandwich Tern in as many weeks. I was the only one that had a visual of the Sandwich Tern because it took off before the others had a chance to look at it when something or someone flushed the birds. Andy did indicate he heard what sounded like a Sandwich Tern and later on found out from Shia that he too had heard a Sandwich Tern call. 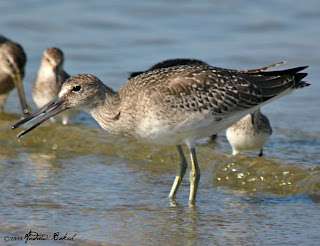 After a few hours at Saag Pond we drove around checking a few creeks, and eventually ended up in Cupsogue around noon. Unfortunately, parking again was a hassle as the beach goers were out in full force. This time around we lost out as the lots were full and we were forced to abandon our trip out to the flats. Nevertheless, we did do some monitoring of one spit off shore and even managed to walk out in the water to get close up looks. At that location, Corey had a nice find of about 10 Royal Terns that had congregated on one island. Later on we did a brief sea watch and saw Northen Gannets and a Cory’s Shearwater. We called it a day around 6:30 PM and headed back to Queens arriving around 8:00 PM. It was another good day out in Suffolk with a very nice list of Shorebirds found. 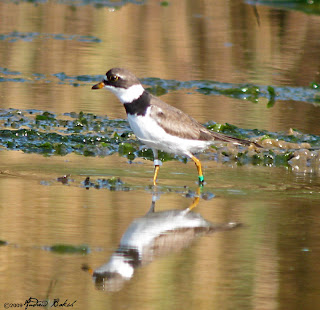 None of the birds seen were lifers or year birds for me; nevertheless, I thoroughly enjoyed the looks. Hopefully, the birding continues to be good out East resulting in good sightings and photos. I guess you will just have to keep checking to see what happens the next time I am out birding in Suffolk County.

Posted by BIRDINGDUDE at 5:04 PM

Great day of Birding! You are so lucky to know such great birders, though it looks like you are a very good birder yourself from what I read here on your blog posts!
Nice Pics!

@Dawn - Thanks for stopping by and leaving a comment. I am indeed lucky to have met such good birders who are generous with their time and knowledge. I know just a tiny bit :)