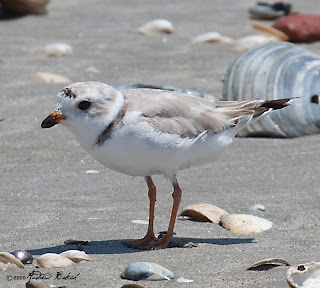 I was out at my favorite birding spot…you guessed it, Jamaica Bay Wildlife Refuge, when I got a call regarding monitoring Piping Plover nests in Breezy Point Queens, this area is part of Gateway National Recreation Area. Apparently, the Plovers had not done very well this year due to predation and there was a dire need for monitors to watch the second nesting attempt. I was definitely interested and so I worked out when and the time I would help out. This was exciting for me. I had just wrapped up helping out on a Horseshoe Crab and Shorebird monitoring program and now I was going to be involved in monitoring Piping Plovers, an endangered species. It is a good feeling thinking that maybe your work could help to make a difference. 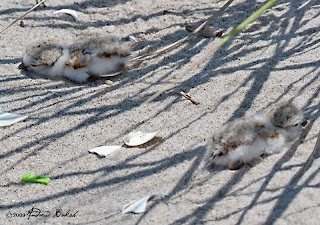 Piping plovers (Charadrius melodus) are small shorebirds approximately seven inches long with sand-colored plumage on their backs and crown and white underparts. Breeding birds have a single black breastband, a black bar across the forehead from eye to eye, bright orange legs and bill, and a black tip on the bill. During winter, the birds lose the black bands, the legs fade to pale yellow, and the bill becomes mostly black. Like other Plovers, it runs in short starts and stops. When still, the piping plover blends into the pale background of open, sandy habitat on outer beaches where it feeds and nests. If you think the adults are hard to find when they are not moving, try looking for chicks when they are not moving, it requires the patience of “Job”.

The Piping Plover, breeds on coastal beaches from Newfoundland and southeastern Quebec to North Carolina. These birds winter primarily on the Atlantic Coast from North Carolina to Florida, although some migrate to the Bahamas and the West Indies. Piping Plovers were common along the Atlantic Coast during much of the 19th century, but nearly disappeared due to excessive hunting for the millinery trade. Following passage of the Migratory Bird Treaty in 1918, numbers recovered to a 20th century peak which occurred during the 1940’s. The current population decline is attributed to increased development and recreational uses of beaches since the end of World War II. A 2007 survey placed the Atlantic population at about 2000 pairs. Hopefully this number has and will continue to increase steadily. 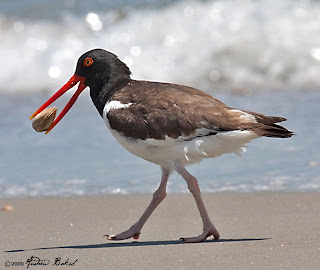 Piping Plovers return to their breeding grounds in late March or early April. After establishing nesting territories and doing their courtship rituals, the pair forms a depression in the sand higher up on the beach closer to the dunes. The nest is sometimes lined with small stones or fragments of shell. The 3 to 4 eggs are well camouflaged and blend extremely well with their surroundings. Both sexes incubate the eggs which hatch within 25-30 days, and both sexes feed the young until they can fly, about 30 days after hatching. When predators or other intruders come close, the young chicks squat motionless on the sand while the parents attempt to attract the attention of the intruders to themselves, often by feigning a broken wing. See the short video in my previous post to see a demonstration of this behavior when an Oystercatcher got too close to a nest. Surviving fledglings are flying around in about 30 days. Sometimes the nests are disrupted for a variety of reasons and when that happens, the Plovers try a second nest. This often means that the young may not be flying until late August. Plovers depart for the wintering grounds from mid-July through late October. Tags:

Posted by BIRDINGDUDE at 2:10 PM

Hey, Dude! Maybe I missed it, but did you mention that where you were monitoring is part of Gateway National Recreation Area? ALways trying to get a plug out there. Thanks!!!!
Great shots of the chicks...definite "awwwwww" images.

@ Julia - Hi Ranger Julia, thanks for dropping by and leaving a comment. No, I did not mention GNRA, so thank you for pointing that out. I made an amendment. I am not sure if I spoke to you in the afternoon, but I did try in the evening for the Avocet, but it was a no show.

Aside from Jamaica Bay, I have never birded in Queens or Long Island. I really need to get over there more. Your posts are very inviting. There is the tiny problem if a City in the way though.