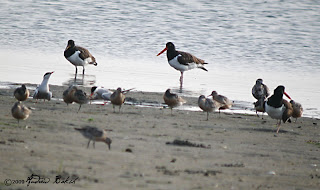 I called Cory Finger of 10000birds, on Friday and asked him if he was interested in making a trip to Cupsogue in West Hampton Long Island, for possible Brown Pelicans and other birds. Corey was up to the trip and so the next day we were on our way out of Queens around 6:00 AM. According to the tide table we had plenty of time for low tide, so our first stop along the way was at Jones Beach at the Coast Guard Station. It was at this stop that Corey realized that he had not packed his Digiscoping adapter. I felt bad for him, and I was reminded how I felt when I had forgotten my bins on a Doodletown/Bashakill/Shawangunk trip. I tried to downplay whenever I took photos, so as not to make him feel worse. 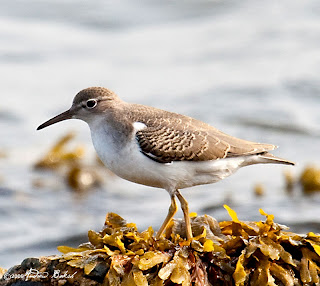 In the beginning, the sandbar at the Coast Guard station had just a few birds; however, as we got through most of them, birds out of nowhere started to show-up. We had Double Crested Cormorants, Ring-billed Gulls, a Great-Blackbacked Gull, Semipalmated Plovers, Black-bellied Plovers, Piping Plovers, Short-billed Dowitchers, Lesser Yellowlegs, Willets, Ruddy Turnstones, Least and Semipalmated Sandpipers, a Spotted Sandpiper, Oystercatchers, Black Skimmers and around 59 Red Knots . We also had Forsters, Least and Gull-billed Terns, 3 of the 8 tern species we would tally, with one of them being the highlight bird of the day, which you will learn about as you read on. 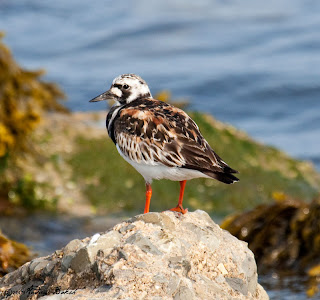 After about an hour scoping the sandbar, we decided that it was time to move on and headed to the Fisherman’s parking lot checking the edges along the way. We quickly picked up several species for our day list including our only warbler of the day in, "Yellow Warbler". We also had several Song Sparrows and marveled at their darker plumage at this location. At the fisherman’s parking lot we realized it was much too busy for birds to be hanging out; nevertheless, we did get nice looks at more Spotted Sandpipers, Rudy Turnstones on the rocks and Double Crested Cormorants flying over the water. A brief scope over the water and near the far shore did not reveal anything that looked like a Brown Pelican, so we backtracked to the coast guard station. Before we left that location we had another Yellow Warbler and American Goldfinches. 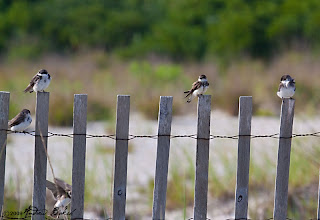 Our next stop was at West End II, where we observed a number of Swallows perched on the fence adjoining the parking lot. We had Barn, Tree and Bank Swallow. At one point, Corey thought we had a Cliff Swallow, when we observed one or two swallows that showed some white on the forehead, but a closer look at the tail disqualified them. Interestingly, Sibley’s Eastern Field Guide, does not make any reference to juvenile Barn Swallows as having any whiteness on the forehead. A short walk to the beach and subsequent sea watch did not reveal any Brown Pelicans. We did however, came across a flock of Sanderlings, numbering close to 400.

By that time Corey was ready for health food as he likes to put it and so we headed out to the closest Dunkin Donuts. While there, I checked my e-mail and found that a Brown Pelican was seen at Riis Park in Queens. Of course, we were both disgusted at the report, but decided to stay the course to Cupsogue. Our next stop was Cow Meadow Park, where there were ample Black-Crowned Night-Herons, Yellow-Crowned Night-Herons, Snowy and Great Egrets. We also added Clapper Rail to our day list as we heard two of them calling back and forth in the marsh. We saw some shorebirds flying around, and even though we tracked them to where they landed, we did not have any open areas from where to look. Following Cow Meadows, we made a stop at Gabreski airport, which did not turn up anything we hoped for like Upland Sandpipers or Vesper Sparrows. However, we did pick up a Turkey Vulture the first of the day. We left after about an hour and arrived shortly after at Cupsogue Beach Westhampton. The beach goers were out in numbers and that made parking an issue, but we were not dissuaded and made our way down Dune Road for possible species driven closer to the shore by the high tide. We were on our way back from driving all the way to Shinnecock inlet and I had pulled over by Dolphin Lane to allow a tailgater to pass as I wanted to drive slowly along the road when I noticed some peeps taking a bath in a puddle. I pointed them out to Corey and we began examining them to discern what types were in the mix. We were concluding that there were all Least and Semipalmated Sandpipers when I noticed a bird flying on our right heading past us going North. Shouting, “what’s that bird”, both Corey and I put our bins up as it flew by calling. We both stammered to get the word out and when it did in unison it was "Whimbrel". Whimbrel! we repeated. This was a good bird to have. Corey, immediately felt the need to send a message out to some of his friends. While I played the call over in my head and marveled at the luck we had in seeing that bird. 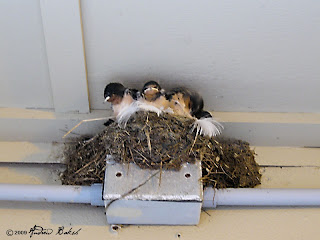 Okay, so you may think that the Whimbrel was the highlight bird of the day. Well at that moment it was, but there is more. We continued on to where the Cupsogue flats are located. After parking and preparing for the hike through the channels, we walked out towards the flats only to find that the tide was still high. The channels, before the mudflats are tricky to maneuver and we were not about to chance walking out there with the tide that high so we held off. Corey suggested walking a bit towards the North End of the beach to look for Brown Pelicans, which we did, but it was just too busy in the water with boats for Pelicans to be around. To kill some time we headed back to the boardwalk to get something to drink. On our way, we met some other birders and eventually joined them on the board walk for refreshments. Pat Lindsay and Andy Baldelli indicated that they would join us out on the flats. Later on, as we prepared to head out to the flats we were joined by Shai Mitra.

Now, if you read an earlier Suffolk County Post, you would recognize the three names mentioned, as they were there with us the day we landed the Arctic Tern and it was Shai Mitra who had found it. I was very pleased that they were joining us because they are birders extraordinaire and in my opinion, some of the nicest birders you could ever meet in the field. With more eyes we had a very good chance of finding something really good. 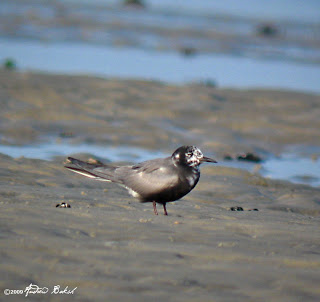 It was not long on the mudflats before Shai called out a molting "Black Tern", we quickly keyed in and all had excellent looks. Soon, Corey walked off a bit with Pat and Andy to look at some shorebirds while I stayed with Shai and scanned the Terns. I began discussing juvenile Common and Forester tern plumage with Shai and he spoke in great detail on what to look for. Corey, Pat and Andy soon returned and we all continued to look at the various birds on the flats. Shai then called out Roseate Terns; again, we all keyed in on the birds and had great looks. 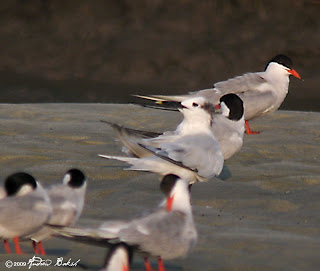 The light was starting to fade a bit and there was talk by Corey, Pat and Andy about it being time for another round of margaritas. Shai gently reminded us to remain focused, and then called out, "Sandwich Tern". This was a great find and our bird of the day! The Sandwich Tern is listed as a very rare bird in NY State and here we were looking at one with the black beak and yellow tip. 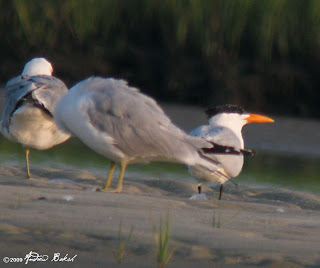 The Tern fest was not finished, as a few minutes later Pat got into the thick of things by calling out Royal Tern. We found two of them hanging out with Ring-billed Gulls and had great looks. Just before we headed off the flats Shai spotted a good candidate for a Long-billed Dowitcher. In analyzing the bird he proceeded to provide an excellent lesson on how to identify a hendersonii Short-billed Dowitcher from Long-billed Dowitcher. By then, the light was fading fast and some of us began heading off the flats. Shai and I lingered a bit looking at juvenile Common and Forster's Terns, but soon after headed out and joined the group for dinner and drinks. The ride back to queens was a long one made so by an unusual amount of traffic and I got home close to midnight. I was tired but pleased at the birds seen and grateful for the kindness shown by Pat, Shai and Andy. 8 species of Terns, Common, Least, Gull-billed, Forster, Black, Roseate, Sandwich and Royal, it was a Tern fest indeed.
Tags:

Truly a day birder's dream about! I'm very impressed you could ID all those shorebirds too - they're not easy, and most are beyond me. Well done!

Man..what an amazing day you had!
You are quite the birder..but it is always great to go out with others more knowledgable!
Love your photos!
Wish you would label them ..for us novice birders..I know some are obvious..but just a suggestion..I guess without the labels, might be better as i should get out my bird book and ID as if in the field.
I guess I am lazy. :)

What a day and what great birds.

Thanks for driving, and here's hoping that some good shorebirds show up on the East Pond.

@Pat - Hi, thank you for stopping by and leaving a comment. Well, I think you are giving me more credit than I deserve, but I'll take it :)

It was a good day with excellent birders and GREAT birds.

@Dan - Hi Dan, thanks for stopping by and leaving a comment. It was indeed a fantastic day!

@Dawn - Hi Dawn, thank you for stopping by and leaving a comment.

I used to label my photos and then I decided to stop for a while.I was thinking it would be a good way to get folks to learn a bit more on ID'ing on their own; thus, giving them practice for when they are in the field.

@Corey - - Hi thanks for stopping and leaving a comment. A great day it was. I really felt bad about the Digiscoping adapter, so I won't even say anything about photos. Thanks anyway.

Awesome day of birding Birding Dude! Those shorebirds are challenging for sure.

I have decided never to leave a birding spot too early. When you think it's about time to leave, stay for awhile longer and you usually get an extra treat!

Barn Swallow are extremely variable -- and very few guides really mention this. We sometimes have Barns in South Africa (from the Eurasian population) that have completely white throats.

I saw a young Barn at Prospect Park yesterday that had the same white forehead you were talking about.

Sounds like you guys had a great birding day. Congrats!