I must have had a four-leaf clover in my pocket or lady luck decided to blow a little luck my way.  How else could one explain the day I had on May 15th 2011.  Following our successful birding stint at Forest Park, which resulted in Yellow-throated Warbler (Dendroica dominica) and other goodies, Doug Futyma, and I birded Jamaica Bay Wildlife Refuge and then headed out to Jones Beach LI. Our first stop was the Coast Guard Station where we were hoping for shorebirds and possibly the reported Gull-billed Terns. We parked our vehicles and while I was getting my gear together, Doug had an encounter with an individual I refer to as the “crazy cat lady”. I only mention this because it is worth knowing to avoid this lunatic! Last year, I had an episode with this lady and so tried to warn off Doug, but it was too late as they engaged in a lively discussion.  It was not pretty as Doug’s inquiry on why she was feeding cats in a bird area was met with a flurry of expletives and threats.  I could not take the shouting match, so I moved away from the scene and setup my scope to scan the exposed sandbar at the Coast Guard Station. There were shorebirds present and so I gleefully began parsing through the species and counting the birds. Doug finally decided he had enough of the crazy cat lady and joined me. I pulled out our first goodie in a White-rumped Sandpiper (Calidris fuscicollis) and Doug brought my attention to Gull-billed Terns (Sterna nilotica) that arrived. We continued scanning and counting birds; after about an hour we decided it was time to move on. We headed back to the parking lot and after putting away our gear went for a bathroom break before leaving. I had exited the bathroom and was walking over to Doug, when I noticed he had his bins up on something that was out of my vision. Doug saw me approaching and cautioned me; I immediately knew he had something of interest. As soon as I was able to get into a position to see what he was looking at I glanced over and stared in shock; A Dove with a large white patch on the edge of its wings was slowly making its way in the parking lot towards us. I had seen this bird before - though, in Arizona last year. No way, I thought. By then, I had reached Doug and he whispered, what do you think? White-winged Dove? Yes it looks good for it, I replied, but then cautioned that we ought to look the bird over really carefully to ensure we were not looking at some maligned Mourning Dove. Doug was certain of what we had, but since I did not have much experience with this bird I was more cautious.  After a we spent a few minutes studying this bird, we both agreed that we were looking at the real deal. Doug began jotting notes and I circled back to get my scope and camera gear from my vehicle. While Doug continued to take notes, I began to capture documentation photographs of this bird. Satisfied that we had a rarity, we decided to get the word out. The first to arrive on the scene was Dave Klauber, followed by Shia Mitra and Patricia Lindsay; they all enjoyed looks of the bird before it wandered off into the shrubbery near the dunes alongside the parking lot. The bird did that a few times but always came out after a minute or two.  However, just as other birders were about to arrive it went into the shrubs and stayed in;  after about 5 minutes, we began to get anxious. Other birders were on their way, we had to relocate this bird. We waited for about an hour, but no bird.  A decision was made to have a few of us venture into the dunes; first Shai, then Doug searched in the area.  The bird did flush but it was seen only by me.  It came down to Tom Burke who spotted the bird perched in a dead pine tree right not far from where I had seen it fly. Birders who had shown up and given up after an hour or so were called back and they luckily got on the bird. Finally satisfied, that others were now on the bird, Doug and I finally left the area. Birders went out looking for the White-winged Dove (Zenaida asiatica) the following day, but it was never relocated.  What a day it was, first finding a Yellow-throated Warbler and then a White-winged Dove. Hopefully, some of that luck is with me during shorebird season. 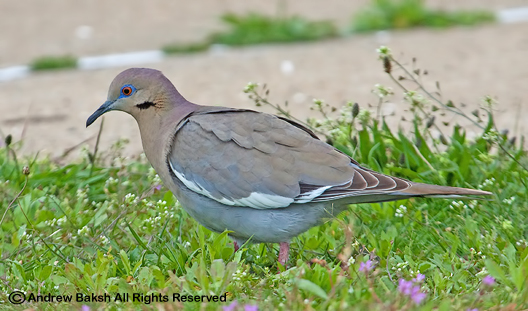 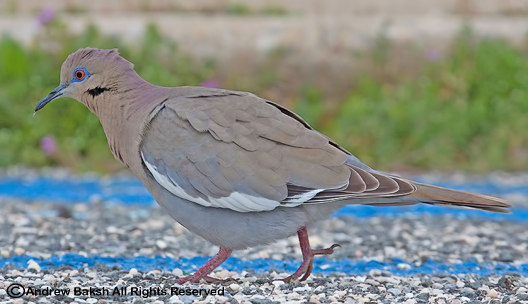 Congrats on the white-winged dove. Beautiful shots and a great post.

Congratulations Andrew! Sometimes we forget that what's usual for us is not at all usual for someone else. I'm watching two White-winged Doves eating from the seed dish outside my office window right now. :)

@eileenmd, @Debbie Miller and @Linda Rockwell, thanks for all the kind comments :)

Congratulations, Andrew! As I recall, this great find came almost on the anniversary of your Wilson's Plover at the same site last year!

@Tixbirdz - Hi Shai, thanks for visiting. Yes, you remembered. I thought of that the day we found the bird. Now, I need to parley that luck into finding something really good during shorebird season.