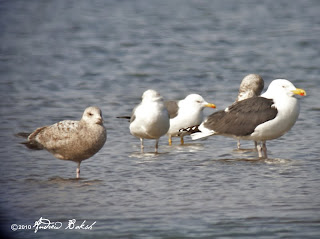 A casual day of birding turned into a chase for Sandhill Cranes that were spotted in Sagaponack Long Island. My Saturday, began with some early morning birding with my friends, Shai Mitra and Patricia Lindsay. We parted ways around 8:30 a.m. as I had designs on birding Fort Tilden in Queens and they were heading to another location on Long Island to bird. Hours later after a series of calls I was heading out to Eastern LI to chase the Cranes. I made one stop to pick up Joan Quinlan (sp) who you might remember was with Shai, Pat and I when we made the trip to the Adirondacks and knocked off three specialties, Tufted Duck, Ivory Gull and Northern Hawk Owl, all in a matter of hours. I was hoping to repeat our streak with the Sandhill Cranes. Joan and I made quick time and arrived at the location where the Cranes were seen earlier, but they were not there. Patricia Lindsay and Gerta arrived moments later to aid in the search. Scoping out the birds on and around the Sagapond flats turned up 2 adult Lesser Black-backed Gulls and 2 Tundra Swans, but no Cranes. Staying positive, we followed Pat to get Shai who was on another mission, in search of a Western Field Sparrow that was seen, but only briefly. 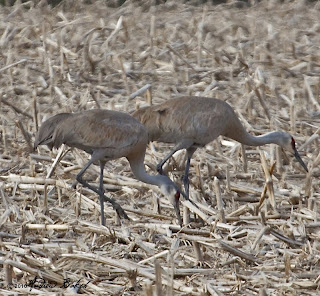 Sandhill Cranes feeding in a corn field at Sagaponack LI

Along the way for Shai, we were checking the fields and it was a corn field on Daniels Lane that we spotted the Sandhill Cranes, picked out first by Patricia Lindsay. They were all the way in the back of the field blending well into the background. We had relocated the birds and so the word went out that the birds were once again found. Pat and Gerta went off to get Shai while Joan and I settled in to watch the Cranes. I digiscoped and photographed the birds enjoying the looks, which was much better than the one I got on the NYSOA trip.
If I got this right, according to the New York State Ornithology Association database. Since 1978, there have been 5 reports submitted of Sandhill Cranes (Grus canadensis) sightings on LI, 3 of which were accepted. This would make number 6, which will no doubt be accepted given the many observers and photograph documentation. 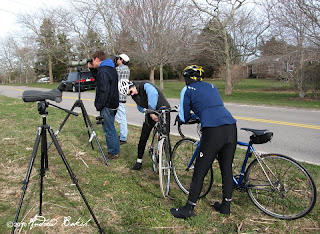 A few locals were interested in what we were looking at. 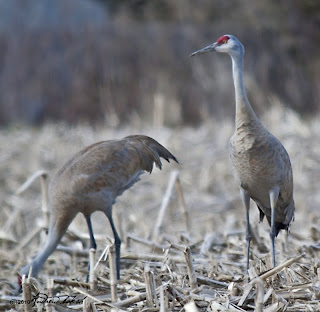 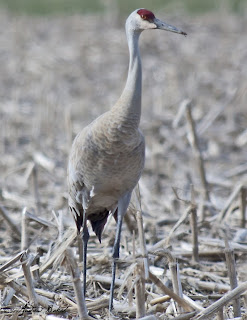 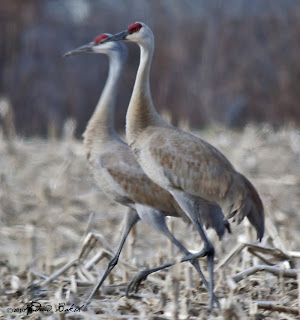 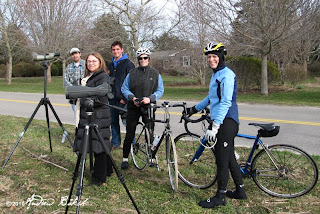 Satisfied birders...and yes, the cyclists got in on the show. 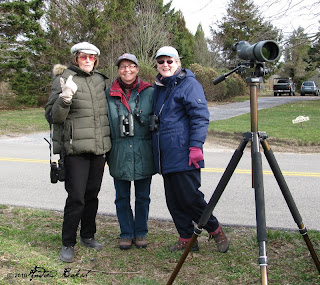 Posted by BIRDINGDUDE at 6:52 PM

How cool to be a part of history in the making! Great post!

@cindyzlogic - Thank you. All but the first photo of the Cranes were digiscoped. We stood at a respectful distance at the edge of the field and the Cranes actually came towards us.

@Kerri - Thanks Kerri, history sounds kind of too much :)...but yes, it was nice to be a part of another rare sighting of these cool birds.

I saw a small flock flying over my sister's house in Kings Park. She is very close to Sunken Meadow State Park. I am familiar with how they look when they are in flight because we lived in Stoughton Wisconsin years ago, and we were on the Fly Way. We had flocks of these magnificent birds flying over our house--hundreds at a time. They would settle in the cornfields after the harvest before flying on. We also had a nesting pair in the summer in the wetlands around Lake Kegonsa. Amazing birds!