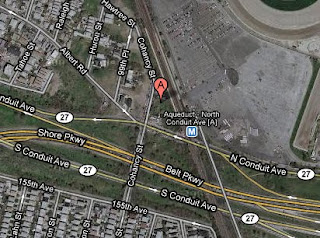 Thanks to alert birders, Rudy Bedia, Richard Aracil and Heidi Lopes, an Ash-throated Flycatcher was discovered in an unlikely area - a vacant lot in Queens NY. Though, when one really thinks about it, maybe...it was in the right place making me wonder how many such goodies we are missing.

I was at Jamaica Bay Wildlife Refuge co-leading a walk with my friend Don Riepe when I first learned about the bird from Shai Mitra who called to alert me about the find and pending report; The walk was coming to a close, so I grabbed a pen and took some notes such as street crossing, exits - anything, that would help me pinpoint the location, keeping in mind that Shai was relaying what he was told. Shortly after my conversation with Shai, I got a call from, Gail Benson, who was with Tom Burke in New Jersey - I indicated to them that I was gathering intelligence (I like saying that...it sounds so cool :) on the whereabouts of the location.

From then, things just evolved. The power of technology was on full display as birders used cell phones and GPS systems to coordinate and navigate their way to the area where this bird was found. When I got there, the three birders who had reported the bird were just leaving; I chuckled at the incredulous look on their faces when I pulled up and asked if they were the ones that reported the bird. They could not believe that I had received the information and gotten there that quickly. Such, is the power of technology coupled with friends who were willing to share information. Rudy, Richard and Heidi displayed true altruism by getting out of their car and returning to the location where they had the bird in an effort to get me on it; they ended up staying for a few more hours helping to get other birders that arrived later to get on the bird. 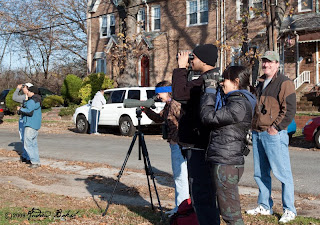 Not long after I got there, I was joined by Seth Ausubel and we both got on the bird with outstanding looks. While Seth called Tom Burke, I called Shai who was on his way. Soon we were joined by Shai Mitra and Patricia Lindsay who also got fantastic looks and further confirmed the ID of the bird. I then put in a call to Karlo Mirth (remember him from the Golden Plover find at JBWR), who had called me earlier about Black-legged Kittwakes being seen close in at Fort Tilden and relayed instructions on how to get to our location. In 20 minutes, Karlo was also enjoying excellent views of the bird. Later on, Tom Burke and Gail Benson, finally arrived - they had rushed back from a trip out at Sandy Hook New Jersey. They also got on the bird and got super looks of it as well. Another gentleman whose first name I got, Tom, but not his last name was also there and he too got on the bird.

Huge, huge thank you to Shai Mitra, Tom Burke and Gail Benson who called and relayed the information I needed to get on that bird as quickly as I did. Lloyd Spitalink also deserves a lot of credit in getting the word out as quickly as he did once he got the report of the bird.

Ash-throated Flycatcher (Myiarchus cinerascens), is a rare vagrant to the East Coast. Recently, individuals have been turning up nearly every year, and have been found in all coastal states and provinces. Sightings are less frequent from inland areas in the East and Midwest. After some feedback (see the comments section below) I did some checking and the NYSARC report seem to indicate this would be the 5th such sighting in Queens NY if it is accepted. Bull's Birds of New York State pg 371. indicates that the first possible sighting in Queens could have been at Riis Park in 1978. Enjoy the photos! 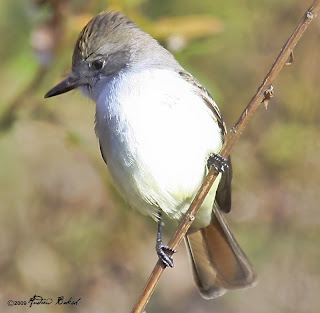 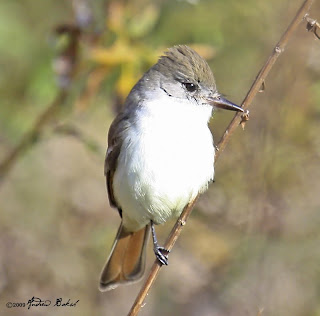 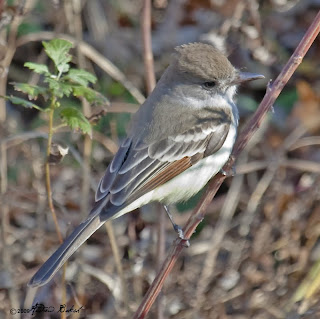 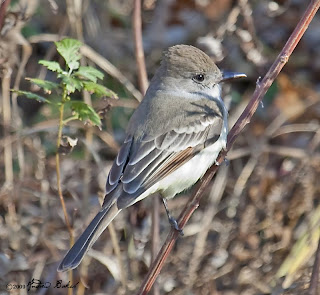 Additional photos of the Ash-throated Flycatcher will be posted to my Flickr account. Check back for a link to be posted soon.

Posted by BIRDINGDUDE at 8:15 AM

Nice bird...wish I could chase it.

Hi Corey - thanks for visiting and pointing out the correction. I made the change. Hopefully that stands unless someone else say there was another one :)

There was also one at Jam Bay in September 2000: http://www.nybirds.org/NYSARC/Reports/NYSARC2000.html

@Shai - Hi Shai, thanks for visiting and leaving a comment. I made the update.

On November 20, 1999, I was birding with a group at Fort Tilden when Dale Dyer came running over to us. He found an Ash-throated Flycatcher behind the baseball fields. Over a dozen birders were present for that great find.

Must have been a thrilling day! Lovely pics!!

Thanks for the spot on directions over the phone that enabled me to get there quickly! This is the second ATFL I've seen in Queens; the first one was shown to me in Dec. 2000 at Alley Pond Park by the late, great Al Ott.